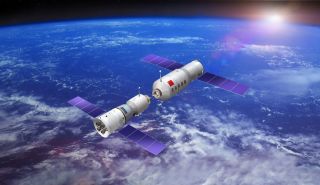 China will launch a test module for its first space station next week between Sept. 27 and Sept. 30, state media reported today (Sept. 20).

The unmanned module, called Tiangong-1 (which means "Heavenly Palace") will test autonomous docking procedures and other space operations in preparation for China's plan to build a 60-ton space station by the year 2020.

The liftoff was delayed last month when a Long March 2C booster, similar to the rocket that will loft Tiangong-1, failed to deliver an experimental unmanned satellite to orbit. However, after an investigation into the accident, China successfully launched a military satellite aboard a related Long March 3B/E rocket on Sunday (Sept. 18), clearing the way for the Tiangong liftoff.

Final tests of the spacecraft and its booster will take place over the next few days, a project spokesperson told Xinhua.

"Every main system is standing by and the final preparations are running smoothly," Xinhua reported.

The 8.5-ton Tiangong-1 is slated to dock with the unmanned Shenzhou 8 spacecraft, which will launch at a later date. It will be the first docking between Chinese spacecraft, and will represent a significant step forward in the nation's space capabilities, experts have said.

Medical and engineering experiments will also be carried aboard Tiangong-1. [How China's First Space Station Will Work (Infographic)]

China is only the third country, after the Soviet Union and the United States, to launch a person to orbit. The first Chinese manned mission, Shenzhou 5, launched astronaut Yang Liwei in 2003. Two more manned missions followed, including a flight that featured the nation's first spacewalk in 2008.