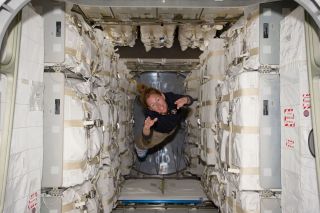 NASA astronaut Sandy Magnus flies through the Rafaello module, filled to the brim with supplies, during the last space shuttle mission (STS-135) to the International Space Station.
(Image: © NASA)

The bus-size cargo pod, called the Multi-Purpose Logistics Module Raffaello, rode up to the International Space Station inside Atlantis' payload bay. The shuttle astronauts robotically attached the module to the Earth-facing port of the space station's Harmony node on Monday (July 11).

The four astronauts aboard Atlantis kicked off their "moving day" in space with a special wakeup song from Mission Control. The astronauts awoke at 2:29 a.m. EDT (0629 GMT) to the tune of "Rocketman" by Elton John, which was followed by a message from the famed singer himself. [Photos: NASA's Last Shuttle Mission in Pictures]

"Good morning, Atlantis! This is Elton John," the artist said in a pre-recorded message. "We wish you much success on your mission and a huge thank you to all the men and women at NASA who worked on the shuttle for the last three decades."

"Elton John, music legend – wow, that is absolutely fantastic," Atlantis' commander Chris Ferguson responded. "Thank you so much for taking the time and joining us this morning. It's great to be here, it's great to be in space."

The Raffaello module, which was filled to the brim with approximately 9,500 pounds (4,300 kilograms) of supplies and spare parts for the space station, will remain on the station while the station and shuttle crews unpack its contents. Altogether there are 10 astronauts aboard the linked spacecraft.

The module will then be filled with about 5,600 pounds (2,540 kg) of trash and other items to return to Earth. The shuttle astronauts will re-install the Raffaello module inside Atlantis' payload bay at the end of the mission before the shuttle undocks from the station and returns home.

Atlantis launched on its final mission on July 8 and arrived at the orbiting outpost two days later. With the retirement of NASA's orbiter fleet this year, the agency used Atlantis' STS-135 flight to take advantage of the enormous amount of cargo that can be ferried to the station onboard the shuttle.

In addition to spare parts, hardware and other supplies, Atlantis hauled up a year's worth of food for the orbiting laboratory, which will help keep the station in operation through 2012. Atlantis' STS-135 mission is the Raffaello module's fourth and final trip to the International Space Station.

For the remainder of their mission, the shuttle crew will unpack cargo from the Raffaello cargo pod and from storage locations in the shuttle's mid-deck. Despite a barebones crew of only four people, the shuttle astronauts have kept up a speedy pace with their work so far, keeping right on or ahead of their timelines each day.

Late Monday (July 11), mission managers opted to extend Atlantis' mission by an extra day to give the shuttle astronauts more time to unpack all the cargo and perform general maintenance work around the space station.