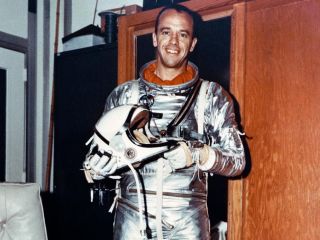 On May 5, 1961, Shepard became the first American in space when his capsule, launched on a Redstone rocket, traveled a suborbital trajectory for 15 minutes before splashing down in the Atlantic Ocean. [Photos: America's 1st Human Spaceflight]

"50 years ago today, Alan Shepard rocketed into space on America's first manned space mission. That flight set our nation on a path of exploration and discovery that continues to this day.

"May 5, 1961, was a good day. When Alan Shepard launched toward the stars that day, no American had ever done so, and the world waited on pins and needles praying for a good outcome. The flight was a great success, and on the strength of Shepard's accomplishment, NASA built the leadership role in human spaceflight that we have held ever since. [Video: Flashback to America's First Spaceflight]

"I was a teenager at the time and just sorting out the field of study I wanted to pursue. Though I never dared dream it growing up in segregated South Carolina, I was proud to follow in Alan's footsteps several years later and become a test pilot myself. The experiences I've had would not have been possible without Alan's pioneering efforts. The inspiration that has created generations of leaders to enlarge our understanding of our universe and to strive toward the highest in human potential was sparked by those early achievements of our space program. They began with Freedom 7 and a daring test pilot who flew the ultimate experimental vehicle that May day 50 years ago. [Infographic: Mercury - America's First Spaceship]

"Today we celebrate a first – and we celebrate the future. Project Mercury gave our country something new, including an astronaut corps and the space vehicles that began our human exploration efforts. [Fifty Years of Human Spaceflight]

"I encourage everyone to not only remember that remarkable achievement, but to be reminded that we are still driven to reach for new heights in human exploration.

"At NASA, each first is grown and expanded until we make the next breakthrough. 50 years ago, we sent the first American into space. Today we have a space station flying 250 miles overhead right now on which men and women have lived continuously for more than 10 years.

"With the same spirit of innovation and grit of those early days of space flight, we now move out on an exciting path forward where we will develop the capabilities to take humans to even more destinations in the solar system. With our support and assistance, commercial companies will expand access to that rarefied area Alan Shepard first trod for America, allowing NASA to focus on those bigger, more challenging destinations and to enable our science missions to peer farther and farther beyond our solar system. [Giant Leaps: Top Milestones of Human Spaceflight]

"We are just getting started. Our future, as an agency and as a country, holds many more firsts. We know the next 50 years will be just as exciting as the last – filled with discovery, innovation and inspiration."