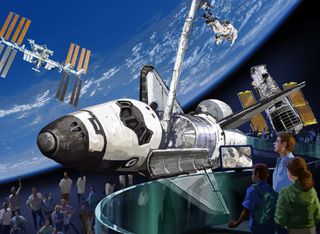 On the surface, NASA's storied space shuttles appear to be priceless, but there is a very real price tag associated with the iconic winged spaceships.

The space shuttles have been flying in space for 30 years and yesterday (April 12), on the anniversary of the fleet's first launch, NASA announced the final museum homes for its three working spacecraft and a prototype that never flew in space.

But exactly how much value will each museum be adding to their collections by displaying the shuttles after the fleet is mothballed later this year?

"I don’t have the exact number, but have always used $2 billion each in the years they were contracted," Herring said. "The contracts for Discovery and Atlantis were awarded Jan. 29th, 1979." [Most Memorable Space Shuttle Missions]

The shuttle Endeavour, NASA's youngest orbiter, has been promised to the California Science Center in Los Angeles, Calif.; Discovery – the oldest and most traveled shuttle – is going to the Smithsonian National Air and Space Museum's Udvar-Hazy Center in northern Virginia; and Atlantis will stay in Florida at the Kennedy Space Center Visitor Center following its final flight this summer. NASA's space shuttle prototype Enterprise, which was used in landing tests but never flew in space, is committed to the Intrepid Sea, Air and Space Museum in New York City.

According to the United States Department of Labor's Consumer Price Index Inflation Calculator, that $2 billion comes out to about $6.1 billion in 2011 cash.

NASA also had two other space shuttles in its fleet, but both were lost in two fatal space disasters. Challenger was destroyed  just after launch in 1986, while Columbia broke apart during atmospheric re-entry in 2003.

The shuttle Endeavour, the orbiter built to replace the Challenger, is worth almost half as much as Discovery and Atlantis thanks to recycling parts and equipment.

"Endeavour was cheaper because we utilized existing spare components from previous vehicle contracts," Herring said. "It was $1.8 billion in 1987 dollars – a single funding infusion from the Department of Defense."

That equates to approximately $3.5 billion by today's dollar value. All together, the three shuttles are worth about $15.7 billion dollars – not bad for vehicles that have enthused such awe and inspiration for decades.

The shuttle Endeavour will make its final launch in late April with Atlantis to follow in late June. Both shuttle missions are bound to the International Space Station, where their astronaut crews will deliver new experiments, equipment and supplies.

Once the space shuttles are retired, NASA plans to rely on Russian, European and Japanese spacecraft to deliver cargo and crews to the space station until American-built private spacecraft are available.

This article was provided by Life's Little Mysteries, a sister site to SPACE.com.Follow Remy Melina on Twitter @RemyMelina