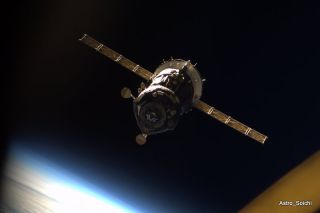 The Russian-built Soyuz TMA-16 spacecraft, as photographed from the inside of the space station by Japanese astronaut Soichi Noguchi, after the ship undocked March 18, 2010.
(Image: © Astro_Soichi.)

NASA has struck a new $753 million deal with Russia for 12 round trips to the International Space Station, but will now have to pay more per seat – almost $63 million, the U.S. space agency announced today (March 14).

The new deal will allow NASA to fly a dozen astronauts from the U.S. or its partner agencies on Russia's venerable Soyuz spacecraft between 2014 and 2015 at a cost of about $62.7 million per seat. That's an increase from the $55.8 million per seat NASA paid under a deal for six round trips to the station in 2013 and 2014.

"It's an 8.5 percent annual increase," NASA spokesman Joshua Buck told SPACE.com, referring to the overall increase. "The increase covers just the general inflation rate in Russia for the cost of processing and preparation."

Russia's Federal Space Agency has been ferrying cosmonauts and astronauts on round trips to the space station for more than a decade. The $100 billion space station has been under construction by five space agencies, representing 15 countries since 1998 and is nearly complete.

The first crew of the space station (called Expedition 1) arrived in November 2001. Three members of the station's latest crew, called Expedition 26, will be returning to Earth Wednesday (March 16) on a Soyuz capsule. [Top 10 Russian and Soviet Space Missions]

The new deal comes during a major transition year for NASA. The space agency is retiring its space shuttle fleet after 30 years of spaceflight.

The shuttle Discovery, for example, flew its last flight this month. The other two shuttles in service – Endeavour and Atlantis – are expected to launch their final missions in April and June, respectively.

Once the shuttles are retired, NASA plans to rely on commercially built spacecraft developed by private companies to ferry astronauts and cargo to the International Space Station. The first flights for those are anticipated around 2015, up to four years after the last shuttle mission flies.

"We are still anticipating having the availability of domestic commercial crew transportation by the middle of the decade," Buck said.

NASA already has contracts with two private companies to build and launch unmanned spaceships to the space station to deliver supplies and equipment.

In a statement, NASA chief Charles Bolden said commercial space companies form a vital part of NASA's exploration plan, since they will give the United States independent access to space with American spacecraft.

"The president's 2012 budget request boosts funding for our partnership with the commercial space industry and prioritizes our efforts to ensure that American astronauts and the cargo they need are transported by American companies rather than continuing to outsource this work to foreign governments," Bolden said. "This new approach in getting our crews and cargo into orbit will create good jobs and expand opportunities for our American economy. If we are to win the future and out build our competitors, it's essential that we make this program a success."

Bluck said that the new deal for seats on Russian Soyuz spacecraft should provide a one-year overlap between astronaut flights on Soyuz craft and the anticipated commercial vehicle trips.

"We need to ensure that we have a smooth transition," Buck said.