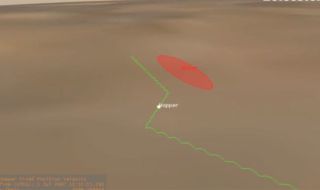 A hopping spacecraft powered by radioactivity could travel much farther (shown in green) than a typical Mars rover (range shown in red).
(Image: © AGI/University of Leicester)

For decades, wheeled rovers have made extraordinary discoveries on Mars, despite exploring only a tiny fraction of the planet. Rugged Martian terrain is often an overwhelming challenge for them, with cliffs and craters blocking their missions.

Instead, scientists are exploring rocket-propelled hopping vehicles that can wander places wheeled rovers only dream of going. The idea is to blast gas from the Martian atmosphere out in jets for thrust.

A number of ideas for Martian hoppers have been floated, all of which face the challenge of needing a lot of energy and low weight to hop useful distances. One concept from NASA scientists is to use a solar-powered vehicle that splits the carbon dioxide abundant in the Martian atmosphere into oxygen and carbon monoxide, which it could then burn as fuel in conventional rockets. Chinese researchers also explored the notion of using electricity from batteries to suck in and heat carbon dioxide, while a French team suggested bringing along magnesium powder as fuel for a limited number of jumps.

Now scientists in England suggest using radioactive isotopes to help squeeze gas into thrusters and heat it up for propulsion. Such a hopper could study hundreds of locations across Mars over several years, they calculated.

Radioactive isotopes have been used to power spacecraft for decades — radioisotope thermoelectric generators (RTGs) that convert the heat from such materials as plutonium into electricity have found use in NASA's Pioneer, Voyager, Galileo, Ulysses, Cassini and New Horizons spacecraft because they can generate power with relatively little weight. [Video: Hopping Mars Spacecraft Bounces Around Red Planet]

"Radioisotope power sources have been launched as part of spacecraft numerous times," said researcher Hugo Williams, an aerospace engineer at the University of Leicester in England.

Now the researchers, in collaboration with Paris-based space manufacturer Astrium, a subsidiary of the the European Aeronautic Defence and Space Co. (EADS), and the Center for Space Nuclear Research at the Idaho National Laboratory, suggest radioisotopes could power the devices that both compress atmospheric carbon dioxide into a liquid and heat it up as a propellant.

"As with any safety-critical engineering system, including ground-based nuclear power, safety is a primary design driver and any nuclear activity is tightly regulated," Williams said. "A hopper would draw on these experiences and design standards and would be subject to an extensive test program to demonstrate compliance with safety requirements."

The main advantage of using such a power source instead of conventional batteries is that it could yield more energy over time. It also would not need to remain in areas of Mars with plenty of sunlight as solar-powered designs would, and would not have to carry fuel all the way to Mars.

"Because the vehicle can collect propellant in-situ from the atmosphere, it has the potential to have a very long life, and therefore visit many sites of interest," Williams told SPACE.com.

At the very least, the researchers found such a hopper could fly in 0.6-mile (1 kilometer) hops. If they use high-performance ceramics such as boron carbide, they could achieve even greater distances by heating the gas up to 2,780 degrees Fahrenheit (1,525 degrees Celsius) or so.

"Extending the hop range depends essentially on carrying more propellant, less mass and selecting an optimum mass for the core — this means saving mass, where possible, on components and perhaps reducing the number of scientific instruments carried," said researcher Richard Ambrosi, a space scientist at the University of Leicester. "There is a very interesting compromise between flight range, how frequently you want to land to take measurements, and how many instruments you take. This is a prime example of where discussion between many organizations will be necessary to come to the best solution to match specific science requirements."

The researchers envision a hopper about 10 feet (3 meters) across and about 880 pounds (400 kilograms) in mass.

"Between flights, the vehicle will be re-heating the core, compressing carbon dioxide to fill the propellant tank and conducting science experiments," said researcher Nigel Bannister, a space scientist at the University of Leicester. "A week is a reasonable initial estimate for this turnaround, but in a final design the compression system could be designed so the refueling time is similar to the expected duration of science experiments."

The scientists detailed their findings online Nov. 17 in the journal Proceedings of the Royal Society A.