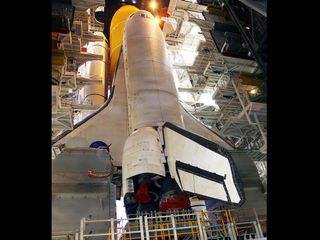 The space shuttle Discovery will make its last journey to its seaside launch pad in Florida tonight (Jan. 31) to once again prepare to fly its final mission before being retired with the rest of NASA's orbiter fleet.

NASA plans to start rolling Discovery out to Launch Pad 39A at its Kennedy Space Center in Cape Canaveral, Fla., at 8 p.m. EST (0100 Feb. 1 GMT) using its massive Apollo-era crawler-transporter vehicle. The shuttle's 3.4-mile trip to the launch pad, which is expected to take at least six hours, will be broadcast and webcast live by NASA TV.

Discovery is slated to launch Feb. 24, carrying six astronauts and a load of new tools and spare supplies to the International Space Station.

The shuttle has been inside the enormous Vehicle Assembly Building at NASA's Kennedy Space Center in Cape Canaveral, Fla., since late December. It has been undergoing repairs for cracks on its giant external fuel tank that were discovered while NASA was preparing to try to launch the shuttle in November. The cracks were found on support beams, called stringers, on the tank.

These remaining missions will focus on outfitting the International Space Station with spare parts to last it well beyond the shuttle era. After the shuttles are grounded, Russian Soyuz spacecraft and international unmanned cargo vessels will deliver crew and supplies to the orbiting outpost.

You can follow SPACE.com senior writer Clara Moskowitz on Twitter @ClaraMoskowitz. NASA will broadcast the final launch pad rollout of shuttle Discovery beginning at 8 p.m. EST on NASA TV, which is accessible by clicking here.