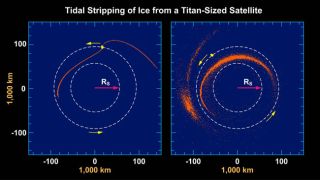 Saturn's famous rings are the last remaining shards of a huge moon the planet tore apart long ago, a new study suggests.

A moon about the size of Titan — Saturn's largest satellite — likely spiraled into the giant planet about 4.5 billion years ago, scientists think. As it made its way, Saturn's powerful gravity stripped off the doomed moon's icy outer layers, thus spawning the planet's magnificent rings, according to the research. [Gallery: The Rings and Moons of Saturn]

And, in death, this lost moon may have given other satellites life, the study suggests. Over the eons, much of the ring material has glommed together, forming the icy inner moons of Saturn.

"This model implies that the rings are primordial, that they formed from the same processes that left Titan as Saturn's only large satellite," said study author Robin Canup of the Southwest Research Institute in Boulder, Colo. "And it's the only self-consistent explanation for the ice-rich inner satellites."

Much of the material in the outer solar system is composed of roughly equal parts rock and ice. But Saturn's rings are different — they're 90 to 95 percent water ice. Since meteoroids have polluted them with dust and debris over the ages, the rings were practically pure water ice when they formed, Canup said.

That makes their origin tough to explain. Some leading theories posit that the rings formed when a comet smashed into one of Saturn's moons, or when the planet's gravity pulled apart a comet that strayed too close.

But such events would probably create rings with lots of rock as well as ice, according to Canup.

"Other theories have struggled to explain an initial ring that was essentially pure ice," Canup told SPACE.com. "That's a very unusual composition."

But the long-ago destruction of a Titan-size moon explains things pretty well, she added.

While Saturn has only one truly gigantic moon today — Titan — it probably once had more, Canup said. Jupiter, after all, has four. Researchers think several Titan-size satellites formed around Saturn during the early days of the solar system but soon spiraled into the planet and died.

In the new study, Canup uses numerical modeling to show that the last of these doomed giant moons likely gave rise to Saturn's rings.

As the Titan-size moon approached Saturn, the planet's gravity tugged on it intensely, stripping off the moon's icy outer layers. These pieces formed Saturn's rings. The moon's rocky core, on the other hand, remained intact, eventually smashing into the planet.

"This process seems to naturally select for a pure-ice ring," Canup said.

This violent process likely occurred multiple times, with several different Titan-like moons spiraling inward to their deaths. But each subsequent event would have disrupted and destroyed any previous ring system, Canup said, so what we see today are likely the shards of the last big moon Saturn gobbled up.

A much bigger ring

A Titan-size satellite would fling off enough icy bits to make a ring system initially 10 to 100 times more massive than the one we see today. But these rings would shrink over time, according to the theory. Ice particles would collide and move about, with some spreading inward to get gobbled up by Saturn.

Other ice pieces would spread outward, where they'd start to stick together. Eventually, enough would coalesce to form icy moons such as Tethys, Enceladus and Mimas — whose masses are consistent with what the model predicts.

In addition to explaining the odd iciness of Saturn's rings and inner satellites, Canup said, the model also has the advantage of describing events that are a natural part of a giant planet's formation and youth.

"The other theories have the rings forming from a sort of random event," Canup said. "This model reduces the number of things that have to happen, which I think makes it more probable."

Canup reports her findings online Dec. 12 in the journal Nature.

Testing the theory out

In a few years' time, scientists should get a chance to test Canup's ring model with some hard data. At the end of its mission — now scheduled for 2017 — NASA's Cassini spacecraft, currently in orbit around the ringed planet, is slated to fly directly over Saturn's rings.

Cassini will make detailed observations that should allow scientists to get a better idea of the rings' mass and age, as well as the rate at which meteoroids are polluting them with debris, Canup said.

Such information should help researchers determine if the rings are indeed primordial, dating back 4.5 billion years as Canup's model suggests.

If the model is on the money, stargazers could gain an appreciation for the sacrifice a giant moon made so long ago.

"I think it's pretty neat to realize that the ring system, which is so famous, is probably the last surviving remnant of a lost satellite," Canup said.