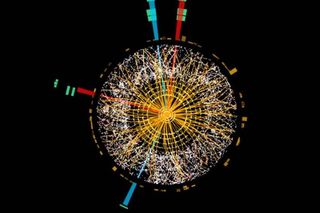 A Higgs boson decays in this collision recorded by the ATLAS detector on May 18, 2012.
(Image: © ATLAS)

Paul M. Sutter is an astrophysicist at SUNY Stony Brook and the Flatiron Institute, host Ask a Spaceman and Space Radio, and author of "Your Place in the Universe." Sutter contributed this article to Space.com's Expert Voices: Op-Ed & Insights.

Symmetries in nature power our fundamental understanding of the cosmos, from the universality of gravity to the unification of the forces of nature at high energies.

In the 1970s, physicists uncovered a potential symmetry that united all the kinds of particles in our universe, from the electrons to the photons and everything in between. This connection, known as supersymmetry, relies on the strange quantum property of spin, and potentially holds the key to unlocking a new understanding of physics.

For centuries, symmetries have allowed physicists to find underlying connections and fundamental relationships throughout the universe. When Isaac Newton first clicked on the idea that the gravity that pulls an apple from a tree is the exact same force that keeps the moon in orbit around the sun, he discovered a symmetry: the laws of gravity are truly universal. This insight allowed him to make a tremendous leap in understanding how nature works.

Throughout the 1800s, physicists around the world puzzled over the strange properties of electricity, magnetism and radiation. What caused electric current to flow down a wire? How could a spinning magnet push that same current around? Was light a wave or a particle? Decades of difficult pondering culminated in a clean mathematical breakthrough by James Clerk Maxwell, who unified all these distinct branches of inquiry under a single set of simple equations: electromagnetism.

Albert Einstein made his mark too by taking Newton's insights one step further. Taking as a maxim that all physical laws should be the same regardless of your position or velocity, he revealed special relativity; the notions of time and space had to be rewritten to preserve this symmetry of nature. And adding gravity to that mix led him to general relativity, our modern understanding of that force.

In the macroscopic world, that just about sums up all the symmetries that we've encountered in nature. But the subatomic world is a different story. The fundamental particles of our universe have an interesting property known as "spin." It was first discovered in experiments that shot atoms through a varied magnetic field, causing their paths to deflect in the exact same way that a spinning, electrically charged metal ball would.

But subatomic particles are not spinning, electrically charged metal balls; they just act like them in certain experiments. And unlike their regular-world analogs, subatomic particles can't have any amount of rotation they wish. Instead, each kind of particle gets its own unique amount of spin.

For various obscure mathematical reasons, some particles like the electron get to have a spin of ½, while other particles like the photon get a spin of 1. If you're wondering how a photon could possibly behave like a spinning charged metal ball, then don't sweat it too much; you are free to just think of "spin" as yet another property of subatomic particles that we have to keep track of, like their mass and charge. And some particles have more of this property, and some have less.

In general, there are two great "families" of particles: those with half-integer (1/2, 3/2, 5/2, etc.) spin, and those with whole-integer (0, 1, 2, etc.) spin. The halfsies are called "fermions" and are made up of the building blocks of our world: electrons, quarks, neutrinos and so on. The wholsies are called "bosons" and are the carriers of the forces of nature: photons, gluons, and the rest.

At first glance, these two families of particles couldn't possibly be any different.

In the 1970s, string theorists began to look critically at this property of spin and started to wonder if there might be a symmetry of nature there. The idea quickly expanded outside the string community and became an active area of research across particle physics. If true, this "supersymmetry" would unite these two seemingly disparate families of particles. But what would this supersymmetry look like?

The basic gist is that, in supersymmetry, every fermion would have a "superpartner particle" (or "sparticle" for short — and the names are only going to get worse) in the boson world, and vice versa, with the exact same mass and charge but a different spin.

But if we go looking for the sparticles, we don't find any. For example, the sparticle of the electron (the "selectron") should have the same mass and charge as the electron, but a spin of 1.

So, somehow, this symmetry must be broken in our universe, driving up the masses of the sparticles outside the range of our particle colliders. There are many different ways of achieving supersymmetry, all predicting different masses for the selectrons, the stop quarks, the sneutrinos and everybody else.

To date, no evidence for supersymmetry has been found, and experiments at the Large Hadron Collider have ruled out the simplest supersymmetric models. While it's not quite the last nail in the coffin, theorists are scratching their heads, wondering if supersymmetry isn't really found in nature, and what we should think of next if we can't find anything.

Learn more by listening to the episode "Is string theory worth it? (Part 4: What we need is a superhero)" on the Ask A Spaceman podcast, available on  iTunes, and on the Web at http://www.askaspaceman.com. Thanks to John C., Zachary H., @edit_room, Matthew Y., Christopher L., Krizna W., Sayan P., Neha S., Zachary H., Joyce S., Mauricio M., @shrenicshah, Panos T., Dhruv R., Maria A., Ter B., oiSnowy, Evan T., Dan M., Jon T., @twblanchard, Aurie, Christopher M., @unplugged_wire, Giacomo S., Gully F. for the questions that led to this piece! Ask your own question on Twitter using #AskASpaceman, or by following Paul @PaulMattSutter and facebook.com/PaulMattSutter. Follow us on Twitter @Spacedotcom or Facebook.