Skip to main content
Sponsored
Space is supported by its audience. When you purchase through links on our site, we may earn an affiliate commission. Learn more 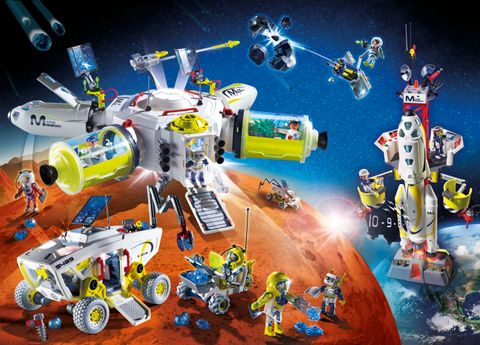 Space is a perfect way to introduce kids to the wonders of science, technology, engineering, and mathematics (STEM), especially when they can pretend to be Martian astronauts in their spare time.

A new series from PLAYMOBIL does just that, encouraging children to imagine themselves living on the Red Planet and building on the work that astronauts do today on the International Space Station.

As kids delve further into the depths of space, they’ll soon discover the benefits of learning about STEM. These fields are valuable for kids because they encourage critical thinking, as well as an acute awareness of the world around them. Throw in a cool role model, like NASA astronauts — who may very well be going to Mars in the next few decades — and their interest will grow even more.

PLAYMOBIL offers kids a fully-immersive Mars experience, from launch to landing. There’s lots of different sets in the new line that will have kids blasting off into their own space adventures:

Whether these sets are combined or played with on their own, they allow kids to imagine what it's like to be an astronaut — and introduce them to the skills that they need to get there. Astronauts are an excellent gateway to show kids the many possible careers in space exploration, which attract disciplines as diverse as mathematics, computer science, engineering, and robotics.

PLAYMOBIL's Mars-themed sets are ready to introduce kids to the wonders of space, and parents can find them here.  These toys can cultivate an early interest in science and show the value of studying space and related fields in school. Through play, kids can safely make mistakes, solve problems, and pick up the skills they will need for success later in life — all while having fun.