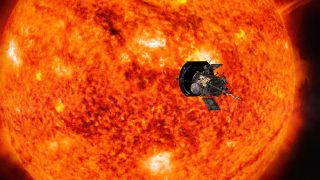 An artist's depiction of the Parker Solar Probe at work around the sun.
(Image: © NASA/Johns Hopkins APL/Steve Gribben)

It's an extra-sunny Sunday for NASA's Parker Solar Probe, which is making its third close pass around the sun today (Sept. 1).

The spacecraft is designed to help scientists better understand the sun and, in particular, its outer atmosphere, called the corona. That atmosphere is millions of degrees, whether Fahrenheit or Celsius — much hotter than the visible surface of the star — and scientists can't quite figure out where all that heat comes from.

So NASA built the Parker Solar Probe, which will make 24 daring dives into the corona by the end of its mission, in 2025. The spacecraft launched last August and has already completed two solar flybys. The third close encounter will come today around 1:50 p.m. EDT (1750 GMT).

For this third flyby, scientists were able to turn the probe's instruments on earlier in the course of the maneuver. That's thanks to unexpectedly high levels of data return from the spacecraft. Operators on the ground received data from the probe's first two passes more quickly than expected and were able to gather additional observations during the second pass.

This time around, the instruments will be working for 35 days straight — three times as long as they did on the first two orbits. The longer observing window means that the probe will be taking measurements from about twice as far away from the visible surface of the sun. Scientists hope that extra data will help them crack enduring mysteries about the sun and how it affects the solar system.

Each loop around the sun brings the spacecraft a bit deeper into the star's atmosphere, giving the probe a more daring chance at science on every orbit. After today's perihelion, as these close encounters are called, things will get even sunnier for the spacecraft.

The Parker Solar Probe's next loop will include a maneuver around Venus that uses the hellish planet's gravity to nudge the spacecraft closer into the sun, setting up the next perihelion for Jan. 29, 2020.