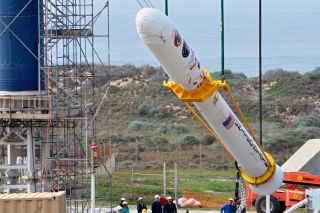 At Vandenberg Air Force Base in California, Orbital Sciences workers monitor NASA's Glory upper stack as a crane lifts the Earth-observation satellite from a stationary rail for attachment to the Taurus XL rocket's Stage 0. Glory launched in March 2011 but failed to reach orbit.
(Image: © NASA)

NASA's Orbiting Carbon Observatory (OCO) and Glory spacecraft were lost in 2009 and 2011, respectively, when their Taurus XL rocket rides failed to deliver them safely to orbit. In both cases, the protective payload fairing surrounding the satellites failed to separate as planned and the spacecraft came crashing back to Earth, agency officials have previously stated.

"From NASA's investigation, it is now known that SPI altered test results and provided false certifications to Orbital Sciences Corporation, the manufacturer of the Taurus XL, regarding the aluminum extrusions used in the payload fairing rail frangible joint," agency officials wrote in a statement today. "A frangible joint is a structural separation system that is initiated using ordnance."

As a result of LSP's investigation, NASA's Office of the Inspector General and the U.S. Department of Justice (DOJ) got involved as well. The work by these organizations concluded that SPI falsified thousands of certifications for aluminum extrusions provided to hundreds of customers over a 19-year period, NASA officials said.

SPI has agreed to pay $46 million to the U.S. government and other customers to resolve criminal charges and civil claims, the DOJ announced last week.

NASA has suspended SPI from government contracting and proposed debarring the company permanently, agency officials said in the statement.

"NASA relies on the integrity of our industry throughout the supply chain. While we do perform our own testing, NASA is not able to retest every single component. That is why we require and pay for certain components to be tested and certified by the supplier," said Jim Norman, NASA’s director for Launch Services at NASA headquarters in Washington, D.C.

"When testing results are altered and certifications are provided falsely, missions fail," Norman added. "In our case, the Taurus XLs that failed for the OCO and Glory missions resulted in the loss of more than $700 million, and years of people’s scientific work. It is critical that we are able to trust our industry to produce, test and certify materials in accordance with the standards we require. In this case, our trust was severely violated."

OCO would have provided precise measurements of carbon dioxide concentrations in Earth's atmosphere. A replacement, OCO-2, is now doing this work. That satellite launched in July 2014 atop a United Launch Alliance Delta II rocket and is still going strong in orbit.

And the OCO-3 instrument will provide more such measurements soon from the International Space Station, if all goes according to plan. This payload will launch toward the orbiting lab on SpaceX's next cargo mission, which is scheduled to lift off on Friday (May 3).

Glory would have collected a variety of data, to help researchers better understand atmospheric composition, the carbon cycle and climate change, among other topics.