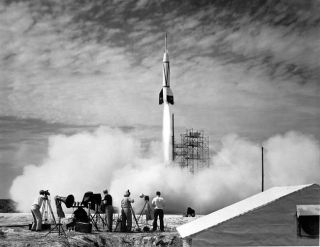 Sixty years ago this week, Florida's"Space Coast"was born with the launch of a rocket called Bumper 8 on July 24, 1960,fromwhat was then called Long Range Proving Ground Base on Cape Canaveral.

Today, CapeCanaveral is America's gateway to the universe, but it wasn'tthe firstplace from which rockets were launched in the United States. [Photo:Florida's first rocket launch.]

After World War II, when militaryrocket technology was inits infancy, rockets were launched from White Sands Test Facility inNewMexico. But the technology was, literally, outgrowing the test rangethere.

"The total length of range at WhiteSands was about 100miles," said Stan Starr, chief of the Applied Physics Branch at KennedySpace Center. "Everything they launched had to go straight up, andslightly to the north so the radar and telemetry stations would be ableto seethe rockets to track them."

But to achieve great distances ? andthere were a number ofmilitary programs at the time had exactly that goal ? they need a longrangeand the ability to track the rocket throughout the range, Starr said. Shouldsomething go wrong, rocket engineers also wanted to be surethat rocketswould land benignly, preferably in an ocean.

"The Cape had a big advantage," Starrsaid overother locations. It was selected for two reasons: the fact that it isrelatively near to the equator compared to other U.S. locations, andthe factthat it is on the East Coast.

An East Coast location was desirablebecause any rockets leavingEarth's surface and traveling eastward get a boost from theEarth's spin. AWest Coast location would either send rockets over populated areas orhave to contendwith launching against the direction of the spin.

And, the rate of spin is at itshighest on the equator andslowest at the poles, so the Cape's southern location also gave it aboost,Starr said. Cape Canaveral is about 28 degrees latitude above theequator.

There were eight Bumper rockets intotal, and the first sixwere launched from White Sands. But Bumper 5 soared to an altitude of244miles, which is higher than the InternationalSpace Station orbiting the Earth today, and heightened theneed to find alarger launching range, Starr said.

The Air Force installation on CapeCanaveral was renamedPatrick Air Force Base on Aug.1 1950.

Today, the Base is adjacent to theKennedy Space Center, andin the years since the Bumper rockets, Cape Canaveral hosted more than3,000rocket launches.

This article wasprovided by Life's LittleMysteries, a sister site of SPACE.com.