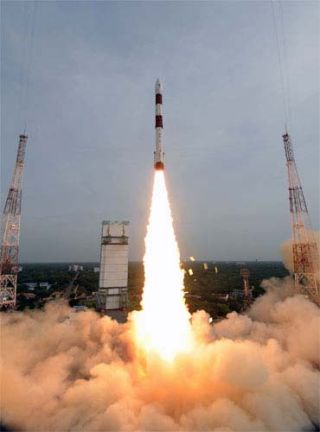 The launch? originally scheduled for May 9 but postponed due to a technical glitch ? tookplace at 9:22 a.m. local time from the Satish Dhawan Space Centre inSriharikota on India?s southeastern coast.

Also launched on the mission were two nanosatellitesweighing 6.5 kilograms and 1 kilogram built by the University of Toronto andthe University of Applied Sciences of Switzerland, respectively, and a0.65-kilogram picosatellite called ?studsat? built by students from sevenengineering colleges in Bangalore and Hyderabad, India, ISROsaid in a statement.

The mission was the 17th flight of the PolarSatellite Launch Vehicle and 15th consecutive success, ISRO said.

ISRO said the 694-kilogram Cartosat-2B was placed in asun-synchronous polar orbit at a height of 630 kilometers. Cartosat-2B carriesa state-of-the-art panchromatic camera that can take black-and-white pictureswith a spatial resolution of 0.8 meters, or sharp enough to distinguish groundobjects of that size and larger.

It is also a highly agile spacecraft, capable of steeringits camera up to plus or minus 26 degrees along its north-south and east-westaxes to facilitate imaging of any area more frequently, ISRO said. ISROspokesman S. Satish said data from the satellite will help preparation oflarge-scale cartographic maps.