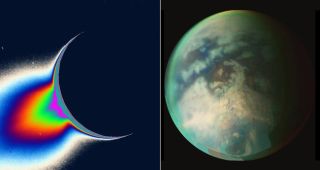 On the left, Saturn's moon Enceladus is backlit by the sun, showing the fountain-like sources of the fine spray of material that towers over the south polar region. On the right, is a composite image of Titan.
(Image: © NASA/JPL/SSI and NASA/JPL/University of Arizona)

NASA's Cassini spacecraft is whipping through adouble-header at Saturn to catch an up-close glimpse of two of the ringedplanet's moons ? the icy geyser-ridden Enceladus and the cloud-covered Titan.

The fortuitous alignment of the two Saturnmoons means that the Cassini probe will be able to observe thesecontrasting worlds within less than 48 hours, with no maneuver in between.

Cassinihas already swooped by Enceladus, making its closest approach early on May 18 GMT(late at night on May 17 Pacific Time). The spacecraft passed within about 270miles (435 km) of the moon's surface.

The main goal of the Enceladus flyby was to watch the sunbehind the moon's water-richplume that flares out from its south polar region.

Scientists used Cassini's ultraviolet imaging spectrograph tomeasure whether there is molecular nitrogen in the plume, which is alreadyknown to contain ammonia. Heat can allow ammonia molecules to break into nitrogenmolecules and scientists want to know if that's happening at Enceladus.

By determining the nitrogen content of Enceladus' geyserplume, scientists could unearth clues about thermal processing in the interiorof the icy moon.

Cassini's second flyby is taking it past Saturn's largestmoon, Titan.

The closest approach will take place in the early hours of May 20 GMT, or lateevening on May 19 Pacific time at NASA's Jet Propulsion Laboratory in Pasadena,Calif., where engineers watch over Cassini. The spacecraft will glide to within750 miles (1,400 km) of the surface of the moon.

Cassini will perform radio science experiments as it passesTitan, in order to detect the subtle variations in the gravitational tug on thespacecraft by the giant moon, which is 25 percent larger in volume than theplanet Mercury.

Scientists will analyze the data to get a clearerunderstanding of Titan's internal structure, and to learn whether the moon hasa liquid ocean beneath its surface. The composite infrared spectrometer willalso use its southernmost pass to collect thermal data to fill out its temperaturemap of the smoggy moon.

Cassini has made four previousflybys, with one more planned for the years ahead.

The Cassini probe launched in 1997 and arrived at Saturn in2004, where it dropped the European Huygens probe on the cloudy surface ofTitan. Cassini was slated to be decommissioned in September of this year, buthas received an extended mission that now runs through 2017.