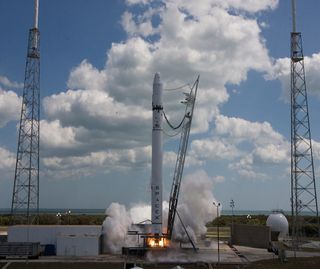 Abrand-new Falcon 9 rocket envisioned to launch cargo ships to the InternationalSpace Station for NASA fired up its powerful first stage engine atop a Floridalaunch pad in a successful weekend test.

Builtby Space Exploration Technologies (SpaceX) of Hawthorne, Calif., the commercialFalcon9 rocket ignited the cluster of nine engines that make up its first stagefor 3.5 seconds during the Saturday test firing, which followed four days ofdelays due to bad weather and a ground equipment glitch.

SpaceXis planning to launch the new Falcon 9 rocket and a flight qualificationversion of its gumdrop-shaped Dragonspacecraft sometime between March and May. U.S. Air Force officials havetold SPACE.com that April 12 is being considered as a potential launch target,but it is not yet approved.

?Thetest validated the launch pad propellant and pneumatic systems, as well as theground and flight control software that controls pad and launch vehicleconfigurations,? SpaceX officials said in an update. ?The completion of asuccessful static fire is the latest milestone on the path to the first flightof the Falcon 9, which will carry a Dragon spacecraft qualification unit toorbit.?

SpaceX?smedium-lift Falcon 9 rocket is a two-stagebooster that stands 180 feet (55 meters) tall and is about 12 feet (3.6meters) wide. The first stage is powered by nine of SpaceX?s own Merlin rocketengines fueled by liquid oxygen and rocket-grade kerosene.

Foundedby Paypal co-founder Elon Musk, SpaceX has a $1.6-billion contract with NASA todeliver 20 tons of cargo to the space station through 2016. NASA has alsocontracted another company, the Virginia-based company Orbital Sciences, toprovide cargo deliveries using the Taurus 2 rockets and their Cygnus spacecraftthat company is building.

Thefirst Falcon 9 flight will not count as one of the three demonstration missionsSpaceX has agreed to fly for NASA under the agency?s Commercial OrbitalTransportation Services program.

Thenext shuttle to blast off will be Discovery, which is due to launch supplies tothe space station on April 5. That same shuttle is slated to fly the finalshuttle mission in September, to end NASA?s space shuttle era after more than29 years of flight. The space shuttle Columbia was the first shuttle to launch,on April 12, 1981.

Musksaid he and his SpaceX team fully expect to encounter glitches during theFalcon 9 rocket?s shakedown period.

"Problemsare expected to occur, as they have throughout the development phase,"Musk said in a statement last week.  "The beta phase only ends when arocket has done at least one, but arguably two or three consecutive flights toorbit."