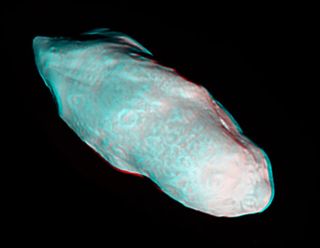 Is it Moby Dick? A potato? H. R. Giger's Alien skull? Lookinglike a combination of all three of those things, Prometheus, Saturn's moon,appears to float out toward the viewer in this 3-D rendering made by theCassini spacecraft.

This stereoscopicview is a complementary color anaglyph image, which combines twoblack-and-white images taken from slightly different angles. By coloring oneimage red and the other blue, the two images can be combined into one stereoimage by the brain of the viewer wearing red-blue glasses. (Glasses notincluded.)

The viewer is being treated to a view of the leadinghemisphere of Prometheus(53 miles, or 86 kilometers, across). North on Prometheus is up and rotated 47degrees to the right. The end of Prometheus on the lower right points towardSaturn, while the opposite end on the upper left points away from the planet.

The Cassini spacecraft narrow-angle camera took theimages in visible light on Dec. 26, 2009. The view was obtained at a distanceof approximately 35,000 miles (57,000 kilometers) from Prometheus and at aSun-Prometheus-spacecraft, or phase, angle of 33 degrees.