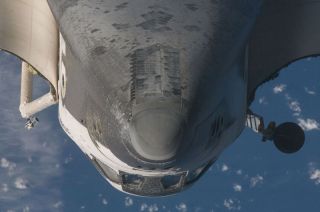 The forward heat shield of the space shuttle Endeavour getsa close up in this photo taken by an ISS astronaut before the two spacecraft docked on July 17, 2009 during the STS-127 mission.
(Image: © NASA.)

Astronauts aboard the space shuttle Endeavour took one last look at their spacecraft's heat shield Wednesday to hunt for any new damage sustained on its marathon flight to the International Space Station.

Endeavour's seven-astronaut crew used a sensor-tipped inspection pole to scan the vital heat shield panels lining nose and wing edges of the spacecraft for any new dings while the shuttle has been in space. The shuttle undocked from the station Tuesday and is set to land in Florida on Friday.

"We do pretty much the exact same thing on this day to make sure that we haven't had any damage while we're on orbit from micrometeorites,' said Endeavour commander Mark Polansky in a NASA interview.

Polansky and his crew are headed home to wrap up a grueling 16-day mission to the space station. During their 11 days linked to the outpost, the astronauts temporarily boosted the station's population to 13 people while working alongside the outpost's core six-man crew.

Together, the astronauts replaced a member of the station's crew and performed five challenging spacewalks to deliver spare parts and new batteries, as well as install a brand new experiment porch on the outpost's $1 billion Japanese Kibo laboratory.

Wednesday's inspection is expected to last for about six hours, with engineers on Earth prepared to analyze the images and data beamed to Earth in order to determine by mid-day Thursday.

While the shuttle astronauts inspect Endeavour, a new Russian cargo ship arrived at the International Space Station early Wednesday, though the outpost's commander Gennady Padalka of Russia had to take remote control of the spacecraft to dock it in a manual mode after its automated system failed. Padalka eased the spacecraft into a docking berth at the aft end of the station's Zvezda service module at 7:12 a.m. EDT (1112 GMT).

Engineers have already cleared Endeavour's heat shield of any concerns related to the more-than-usual amount of foam insulation that fell from the shuttle's external tank during launch.

Analysis of data from the first inspection and a photographic survey by station astronauts just before the shuttle's arrival (also a now-standard chore) found only minor dings in Endeavour's heat resistant tiles on its starboard wing near the forward fuselage point. The dings pose no threat to the shuttle or its crew, mission managers have said.

Annette Hasbrook, mission operations representative for Endeavour's flight, said engineers are confident the shuttle is fit for its planned return to Earth.

"We have not tracked anything unusual that has happened during the joint mission so we expect to see a clean vehicle when we inspect it," Hasbrook told reporters in a late Tuesday briefing.

NASA has kept a close watch on shuttle heat shield health since the tragic 2003 Columbia disaster that killed seven astronauts. Columbia's heat shield suffered severe damage when a large piece of fuel tank foam insulation struck its left wing during liftoff. The damage led to the shuttle's destruction and loss of its crew during re-entry two weeks later.

Since the Columbia accident, shuttle astronauts inspect their spacecraft heat shields at least twice every flight, with station astronauts performing photographic surveys. Extra inspections can be performed to look at specific areas if warranted (it wasn't for Endeavour) and astronauts carry repair tools to fix for some types of damage.