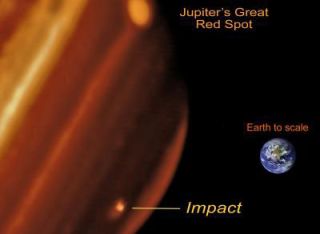 The scar from the probably impact appeared July 19 in Jupiter's southern hemisphere, and has grown to a size greater than the extent of the Pacific Ocean. This infrared image taken with Keck II on July 20 shows the new feature observed on Jupiter and its relative size compared to Earth.
(Image: © Paul Kalas (UCB), Michael Fitzgerald (LLNL/UCB), Franck Marchis (SETI Institute/UCB), James Graham (UCB))

The darkbruise that appeared suddenly near the south pole of Jupiter several days ago,likely as the result of an impact by a comet or asteroid, is as big as the Pacific Ocean, astronomers report.

The darkspot was firstnoticed by chance by amateur astronomer Anthony Wesley in Australia on Sunday, July 19.

The blemishis thought to be the result of an impact similar to that of CometShoemaker-Levy 9, which pummeled the gas giant 15 years ago.

After hewas convinced the spot was not just another storm or the shadow of one ofJupiter's moons, Wesley alerted other astronomers around the world to the scar'sappearance.

University of California, Berkeley, astronomerPaul Kalas took advantage of previously scheduled observing time on the Keck IItelescope in Hawaii to image the blemish in the early morning hours of Monday,July 20. The near-infrared image showed a bright spot in the clouds ofJupiter's southern hemisphere, where the impact had propelled reflectiveparticles high into the relatively clear stratosphere.

In visiblelight, the bruise appears dark against the bright surface of Jupiter.

Theseobservations mark only the second time that astronomers have been able to see theresults of an impact on the planet, the first being Comet Shoemaker-Levy 9'scollision. Many theories were formed after that collision.

"Nowwe have a chance to test these ideas on a brand new impact event," Kalas, said.

Kalas andhis colleagues hope their observations will shed light on the nature of the impact.

"Theanalysis of the shape and brightness of the feature will help in determiningthe energy and the origin of the impactor," said Marchis. "We don'tsee other bright features along the same latitude, so this was most likely theresult of a single asteroid, not a chain of fragments like for SL9 [CometShoemaker-Levy 9]."

Mike Wong,a UC Berkeley researcher currently on leave at the Space Telescope ScienceInstitute in Baltimore, used the observations to calculate that the bruise isnear the southern pole of Jupiter (305 degrees west longitude and 57 degreessouth latitude in planetographic coordinates) and that the impact covers a190-million-square-kilometer area, as big as the Pacific Ocean.

Because ofthe complex shape of the explosion, it is possible that tidal effects (thegravitational tugs of Jupiter and its moons) fragmented the impactor ? a cometor asteroid ? shortly before it collided with the planet.