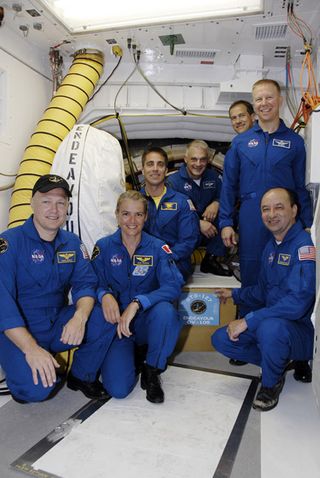 Seven astronauts have snoozed away the days before their planned launch aboard the space shuttle Endeavour, but it is all part of their plan for an overnight mission so extreme that one spaceflyer dubbed it a "stealth flight."

Endeavour is poised to blast off from Florida Wednesday morning at 5:40 a.m. EDT (0940 GMT) on a grueling 16-day construction flight to the International Space Station. To rest up for the predawn liftoff, the shuttle's six-man, one-woman crew has been going to sleep in the morning and waking up at night.

"This represents one of those flights where we have to shift into a completely different time zone," said Endeavour astronaut Julie Payette, who represents the Canadian Space Agency. "For that, we've become a bit of a stealth flight."

Payette and her crewmates are due to wake up tonight at about 6:45 p.m. EDT (2245 GMT) and eat breakfast about a half-hour later, when most people on the East Coast may be sitting down to dinner. Their mission has been delayed since June 13, when a hydrogen gas leak in a vent line on Endeavour's external tank prevented the first launch attempt.

NASA calls the process "sleep shifting" and it is something astronauts do regularly to tailor their day-night cycle, or circadian rhythm, to the rigors of a specific space mission or single event, such as a docking or spacewalk at the International Space Station.

By adjusting their daily routines, the astronaut are able to stay alert and focused no matter when their mission "days" begin, NASA officials said.

"We require crews to sleep shift in order to meet critical mission objectives that must occur during their usual sleep periods," said NASA flight surgeon Terrance Taddeo, chief of the Medical Operations Branch at the Johnson Space Center in Houston. "If done properly the crews avoid the performance decrements associated with sleep deprivation and circadian desynchrony."

In space, the shuttle and station orbit Earth once every 90 minutes, which gives astronauts 16 sunrises and sunsets a day, instead of just one. That means that rather than 12 hours of light and 12 hours of night, they make the switch every 45 minutes. If left unchecked, that can cause serious disruptions in crew work and rest cycles, NASA officials said.

In addition to changing their sleep schedule before launch, astronauts are also subjected to modified lighting conditions inside their crew quarters that simulate their daily schedule regardless of whether the sun is up outside. The swings between high-intensity light and darkness typically begin between three and 10 days before a launch, depending on the time shift, and mimic the sun's role in resetting a person's internal clock each day, NASA officials said.

Astronaut mealtimes, flight simulations, mission training and all other activities are shifted accordingly, and even Mission Control teams adjust their schedules for an upcoming spaceflight, a NASA spokesman told SPACE.com.

Payette said she is hopeful that the public will follow her crew's construction marathon ahead at the International Space Station despite its nocturnal schedule. The mission is NASA's third shuttle flight of the year and the first ever to boost the space station's population to 13 people, its highest ever.

The space station doubled its permanent crew size to six people in late May. Two Russian cosmonauts and astronauts from the United States, Japan, Belgium and Canada are now aboard the station and represent all of the outpost's major international partner space agencies.

"It's truly exciting to go and join six other people on the space station that represent all five partner agencies," Payette said, adding that it will be the first time two Canadians are in space simultaneously. "We'll be 13 on board, that'll be quite interesting. We'll definitely tell you how that was."