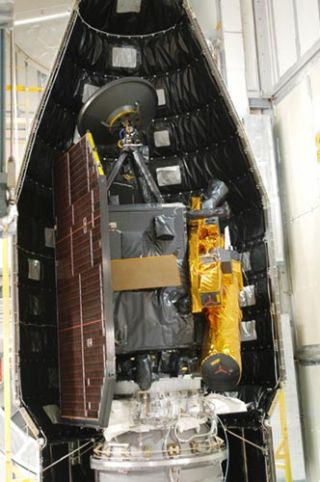 The first half of the payload fairing - a protective shroud for the Deep Impact spacecraft - is moved into place atop a Boeing Delta 2 rocket at Launch Pad 17B, Cape Canaveral Air Force Station, Florida.
(Image: © NASA/KSC.)

NASA's first mission to purposely destroy a spacecraft in the name of science is poised to rocket skyward Wednesday, the start of an anticipated six-month mission to crash into a comet.

"The whole science community has been studying comets for a long time," explained NASA's Orlando Figueroa, deputy associate administrator for the agency's science mission directorate, during the press briefing. "We have flown by them, we have observed them from afar and this year we go for the home run."

Launch officials said there is currently a 90 percent change that Deep Impact will have favorable liftoff conditions despite expected showers and coastal clouds. But weather will become more of a concern later in the week if tomorrow's space shot should be postponed, they added.

At the heart of the mission is the heart of Comet Tempel 1, which scientists hope Deep Impact will expose during a July 4 (EST) cometary collision. If it hits the mark, the mission would give scientists their first glimpse inside a comet and unveil material that was formed during the solar system's infancy.

"The mission, in deep space terms, is relatively short," said Deep Impact project manager Rick Grammier during the press briefing. "It's basically a direct trajectory to the comet."

Deep Impact carries two aptly named space probes, the Impactor probe and its mothership Flyby. The copper-tipped Impactor is designed to actually crash into Tempel 1 while Flyby - equipped with one of the largest telescopes ever launched on a planetary mission - records the event and transmits data from itself and an Impactor camera back to Earth.

"Planetary experiments [like Deep Impact] have been very rare," the mission's principal investigator Michael A'Hearn, a University of Maryland astronomer, told reporters. "Our experiment has a scale comparable to nothing done since the Apollo program, when we dropped Saturn [rocket] boosters and lunar modules to the moon to understand its seismological properties."

If tomorrow's launch is successful - as well as the mission's six-month spaceflight, for that matter - Deep Impact's 820-pound (372-kilogram) Impactor should slam into the sunlit side of Tempel 1 at about 23,000 miles an hour (37,014 kilometers an hour). The resulting explosion would be equivalent to detonating 4.5 tons of dynamite, NASA researchers said.

"A lot of people asked us why we didn't just pack the spacecraft with a whole lot of explosives," said Jay Melosh, a co-investigator in the mission from the University of Arizona. "But Impactor will hit the comet at 10 kilometers a second. That's 10 times faster than a fast rifle bullet and about 10 times larger than the equivalent mass of TNT."

The eighth of NASA's Discovery class missions, the $330-million Deep Impact spacecraft were built by Ball Aerospace and Technologies Corp. While the mission has a single, instantaneous liftoff time set for tomorrow, its actual launch window stretches through Jan. 28, with two launch opportunities daily beginning Jan. 13.

If Deep Impact launches anytime before Jan. 28, it will reach Tempel 1 on July 4 of this year, mission managers said.