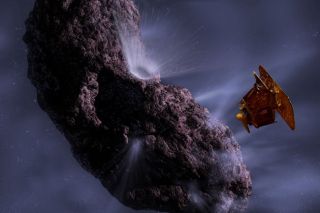 An artist's concept of Deep Impact's arrival at its target comet. The combination Flyby/Impactor spacecraft is expected to reach Comet Tempel 1 on July 4, 2005.
(Image: © NASA/Pat Rawlings.)

The two spacecraft of NASA's Deep Impact mission, dubbed Flyby and Impactor by their makers, are set to launch Wednesday atop a Boeing Delta 2 rocket, their mission: To unlock the inner secrets of comets. .

"All I can do now is worry and hope," said Deep impact principal investigator Michael A'Hearn, of the University of Maryland, during a telephone interview. "And then watch it go."

Deep Impact is currently scheduled for a 1:47 p.m. EST (1847 GMT) liftoff from Launch Pad 17B at Cape Canaveral Air Force Station in Florida. If all goes well, the mission's two spacecraft will tag team Comet Tempel 1 on July 4, with Impactor set to slam into the icy wanderer while Flyby looks on.

Built for NASA by Ball Aerospace and Technologies Corp., Deep Impact is designed to give researchers their first glimpse of the inner workings of a comet. By crashing Impactor into Tempel 1, thought to be a rather typical example of comets, researchers hope to glimpse pristine material that have not changed since the formation of the solar system.

"The interesting part of this mission is that we don't really know what to expect," said Don Yeomans, a senior research scientist with the Deep Impact mission at NASA's Jet Propulsion Laboratory (JPL). "But no matter what happens, we'll observe the phenomena."

Digging into a comet

"We have a tremendous amount of Earth-based data on the composition of gases that come out of a comet and the dust lifted off its surface," A'Hearn said, adding that the object's inner make up is still a mystery. "But the [comet] interior is characteristic of what the solar system formed from."

To measure that material, Deep Impact's Impactor probe -- an 820-pound (372-kilogram), camera-equipped chunk of copper -- will be placed in Tempel 1's path and ultimately slam into the comet at about 23,000 miles an hour (37,014 kilometers an hour). Snapping images until the last, Impactor is designed to give researchers their closest look yet at a comet's surface.

Meanwhile, Flyby will record the event -- along with a myriad of Earth-based and orbital instruments -- with telescopes capable of two-meter resolution and an infrared spectrometer to determine the mineral make-up of Tempel 1's innards.

Flyby should relay at least some data from its own sensors and Impactor's camera during the event, but the spacecraft will continue to send observations home until well after the initial impact.

"I really want to see the data as they come down," A'Hearn said, adding that Deep Impact will allow researchers to look anew at previous comet observations. "On the Fourth of July, we'll all be huddled around TV screens at mission control."

Comet science aside, Deep Impact is also poised to give researchers a ringside seat to what they hope will be a huge cometary smash-up.

When Deep Impact crashes into Comet Tempel 1, the size of its crater remains will depend on the comet's structure and density. Size estimates from mission scientists describe the crater as ranging from a meager 10 meters to the size of the Rose Bowl football stadium in Pasadena, California.

"My personal estimate [for the crater] is at the large end of a large-size football stadium, perhaps 150 meters in diameter," A'Hearn said. "It could be larger."

Researchers are eager to compare Deep Impact's crater - granted the spacecraft reaches Tempel 1 successfully in the first place - because of the past comet craters observations.

Based on images taken by NASA's Stardust spacecraft, which swung by the admittedly odd comet Wild 2, some astronomers believe that comet-based craters differ from their planetary and moon-based cousins.

"They don't look like craters anywhere else in the solar system," A'Hearn said of Wild 2's surface features. "It's the lack of ejecta around them that makes them unusual."

A'Hearn wants to see if Deep Impact's crater has the same attributes, adding that the mission also has the benefit of creating at least one crater on Tempel 1 that is unambiguously an impact feature.

Some researchers are also interested in learning the amount of water in Tempel 1, especially since some scientists believe comets may have been the original vehicles for water to reach Earth.

"Comets are far more than an intellectual interest," Yeomans said, adding if comets were Earth's water delivery system, they form a crucial cog in life's beginnings. "These things affect us, and may have even enabled us [to exist]."

And while they may have played a role in our beginnings, comets could one day be tapped by future human space explorers as a source for water, oxygen and hydrogen fuel for far-flung space missions, NASA researchers said.

"They could be the watering holes and fuel stations for future interplanetary exploration," Yeomans said.