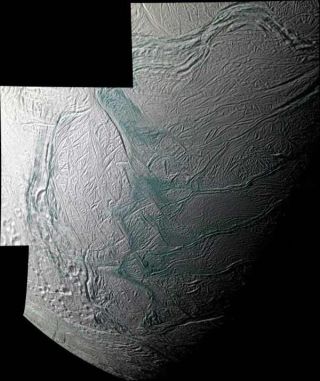 "This is the mother lode for us," said CarolynPorco, Cassini imaging team leader at the Space Science Institute, Boulder,Colo. "A place that may ultimately reveal just exactly what kind ofenvironment — habitable or not — we have within this tortured little moon."

One highly anticipated result of the flyby was finding thelocation within the fractures from which the jetsblast icy particles, water vapor and trace organics into space. Scientistsare now studying the nature and intensity of this process on Enceladus, and itseffects on surrounding terrain. This information, coupled with observations byCassini's other instruments, may answer the question of whether reservoirs ofliquid water exist beneath the surface.

The high-resolution images were acquired during an Aug. 11,2008, flybyof Enceladus, as Cassini sped past the icy moon at 40,000 miles per hour (64,000kilometers per hour). A special technique, dubbed "skeet shooting" bythe imaging team, was developed to cancel out the high speed of the moonrelative to Cassini and obtain the ultra-sharp views.

"The challenge is equivalent to trying to capture asharp, unsmeared picture of a distant roadside billboard with a telephoto lensout the window of a speeding car." said Paul Helfenstein, Cassiniimaging team associate at Cornell University, Ithaca, NY., who developed andused the skeet-shoot technique to design the image sequence.

Helfenstein said that from Cassini's point of view,"Enceladus was streaking across the sky so quickly that the spacecraft hadno hope of tracking any feature on its surface. Our best option was to pointthe spacecraft far ahead of Enceladus, spin the spacecraft and camera as fastas possible in the direction of Enceladus' predicted path, and let Enceladusovertake us at a time when we could match its motion across the sky, snappingimages along the way."

The combination of high-resolution snapshots and broaderimages showing the whole region is critical for understanding what may bepowering the activity on Enceladus.

The images show extensive fallout of icy particles alongsome of the fractures, and even in areas between two jet sources. Scientistssuggest that once warm vapor rises from underground to the cold surface throughnarrow channels, the icy particles may condense and seal off an active vent.New jets may then appear elsewhere along the same fracture.

"For the first time, we are beginning to understand howfreshly erupted surface deposits differ from older deposits," Helfenstein said. "Overgeologic time, the eruptions have clearly moved up and down the lengths of thetiger stripes."

Cassini flew through an icy plume from Enceladus earlierthis year, and detectedorganic molecules similar to those found in comets.