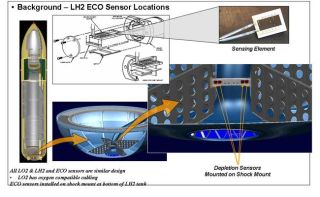 CAPECANAVERAL, Fla. - NASA is now targeting Sunday as the earliest launchopportunity for space shuttle Atlantis as engineers wrestle with a fuel sensorglitch inside the orbiter?s fuel tank.

?We?rethinking about our options and whether the risks are acceptable or not,? WayneHale, NASA?s space shuttle program manager, told reporters late Friday after amore than five-hour discussion by mission managers.

Hale said missionmanagers will make a final decision on whether to press ahead with the planned Sundayspace shot after another review tomorrow afternoon.

NASA shuttleflight rules require at least three of the four sensors to be working properlyin order to launch. Engineers spent much of today studying whether to relaxthat rule and require only two of Atlantis? four liquid hydrogen sensors tobe working, but later proposed that - due to the glitch?s intermittent nature -all four of the instruments should perform properly before a Sunday launchattempt could lift off.

??When wefill the tank up with cryogenic hydrogen again?our past history says they arelikely to all work,? Hale said of Atlantis? fuel gauge sensors, which arecurrently functioning perfectly to indicate an empty external tank. ?That makesit difficult to troubleshoot.?

Three ofthe NASA?s seven shuttle missions that have launched since the agency resumedorbiter flights 2005 following the Columbia accident have been delayed bysimilar fuel tank sensor glitches, most recently in September 2006.

?Webelieved that we had solved that problem, quite frankly,? Hale said. ?We?ve hadseveral flights now where we haven?t had any problem, and we frankly have doneeverything that we know how to do to improve that system.?

In order tofurther reduce the risk of the sensors failing after liftoff, while Atlantis isstill climbing toward orbit, mission managers are targeting a small, one-minutewindow in which to launch the shuttle instead of the traditional five-minutestretch.

The measurewould allow the shuttle to conserve fuel during launch as an extra level ofprotection should the suspect sensors fail during flight, said Mike Leinbach,NASA?s shuttle launch director.

Thespaceflight will mark NASA?s fourth shuttle flight of 2007 and the second thisyear to deliver a new orbital room to the ISS.

NASA mustlaunch Atlantis by Dec. 13 in order to complete the STS-122 mission while theangles between the station?s wing-like solar arrays and the sun are favorableto support docked operations. If the shuttle cannot launch by the window?sclose, NASA would likely stand down until no earlier than Jan. 2, missionmanagers have said.

Currentforecasts predict a 70 percent chance of favorable launch weather on Sunday,with low clouds and the potential for nearby rain showers as the only concern.