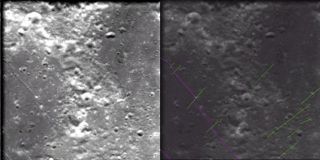 This is a SMART-1 AMIE image of a part of the Humorum basin showing strike slip faults and tectonic wrinkles due to crust deformation around a basin mascon.
(Image: © ESA/SMART-1 and SPACE-X, Space Exploration Institute)

Wrinkles onthe moon could reveal secrets regarding devastating impacts that also ravagedEarth and other planets in their early days.

Theseimpacts could have scoured life from the young Earth?but they might have alsoplanted the ingredients for life as well, scientists said today at a Europeanconference.

Theresearchers focused on giant basins on the moon believed to be wounds from the"lunar cataclysm," a time 3.8 billion to 4.2 billion years ago whenthe moonsuffered heavy bombardment from asteroids or comets. There are roughly 50recognizable lunar basins more than 186 miles (300 kilometers) wide, most ofwhich are thought to date from then.

To learnmore about these basins, the researchers peered at pictures taken by amicrocamera on SMART-1, a European Space Agency satellite that orbited the moonfrom 2004 to 2006. They combined data from these images with records from the U.S. Clementine space probe,which looked at visible, ultraviolet and infrared light from the moon during1994 and measured its gravitational field to determine the makeup andconcentration of minerals in the lunar surface.

Researchersexamined the circular Humorum basin. Clementine suggested it had aconcentration of mass within a small area, a hint that a massive impact poundedthe surface there long ago.

SMART-1revealed wrinkles in the basin suggesting it was in fact caused by an impact.These include concentric "graben," or elongated, trench-like featuresaround the basin's edge, which are formed due to the presence of a massconcentration. "When you put some mass on your own skin, you can seewrinkles pop up, and this is what we see with the Humorum," SMART-1principal scientist Bernard Foing told SPACE.com.

Theresearchers had searched for another hint of an impact, known as radial stressfaults?cracks that would have radiated out like spokes in a wheel. However, theimpact on the Humorum's thin crust apparently led to massive lava flows thatflooded the basin and obliterated these cracks. Still, Foing and his colleaguesdid find other signs of an impact?strike-slip faults, where the ruptures arevertical and one side slides past the other.

Theresearchers also looked at the Procellarum basin. Clementine showed it had nosign of mass concentration, and the SMART-1 images confirmed it did not haveany wrinkles suggesting an origin from an impact. Instead, it may have formeddue to tectonic activity 3.84 billion years ago.

Foingadded the cataclysm that pounded the moon also likely ravaged Earthand the rest of the inner solarsystem. "That was about the same time life is thought to haveoriginated on Earth," he said. "Those are odd conditions for life toemerge. Maybe life managed to endure those challenges, or maybe those asteroidsor cometsbrought some of the ingredients of life with them, such as water, or carbon, ororganics."

Foingand his colleagues detailed their findings at the European Planetary ScienceCongress.