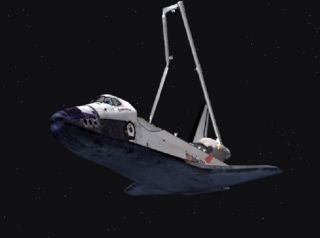 "Theprocedures for this have all been automated over the last couple of missions,"said Matt Abbott, NASA's lead shuttle flight for Endeavour's STS-118 flight, ofthe inspection. "We've really evolved into a very efficient and effectiveway of scanning for any damage due to the ascent environment."

Endeavour'sSTS-118 crew launchedlate Wednesday on a construction mission to the International SpaceStation. Kelly and his crewmates are hauling some 5,000 pounds (2,267kilograms) of cargo, spare parts and a new addition to the station'sstarboard-side truss to the orbital laboratory.

NASA analystswill study the images and data from today's heat shield scan to determine thehealth of Endeavour's heat-resistant carbon composite panels and tiles. Thesurvey is a now-standard activity for space shuttle crews since NASA returnedits orbiter fleet to flight after the 2003 Columbia accident.

"Weuse the robotic arm with that boom on the end of it and basically look at thewhole leading edge of the wings and the nose ? to make sure that we haven'ttaken any kind of hits of any sort that would cause us a problem for entry,like on Columbia," STS-118 mission specialist BarbaraMorgan, a teacher-turned-astronaut who will also aid in the survey."There are quite a few of us doing this job."

Shuttlepilot Charlie Hobaugh will also aid in the heat shield scan, which is expectedto run about six hours, mission managers have said. If any areas of concern arefound in the survey, the shuttle crew has time set aside on Sunday for afollow-up inspection, they added.

Camerasmounted to Endeavour's external tank caught between four and five small piecesof debris falling away form the orbiter after its late Wednesday liftoff, butlate in the flight when the particles would not fly fast enough to causesignificant damage, NASA associate administrator Bill Gerstenmaier said afterthe launch.

NASA haskept a close watch on any debris shed during shuttle launches since 2003, whena chunk of fuel tank insulation foam fell free during the launch of Columbiaand breached the orbiter's left wing-mounted heat shield. The resulting damagedled the loss of the orbiter and its seven-astronaut crew.

Since then,NASA has redesigned shuttle fuel tanks to reduce the amount of foam debrisduring liftoff and instituted in-flight inspections to verify the integrity oforbiter heat shields.