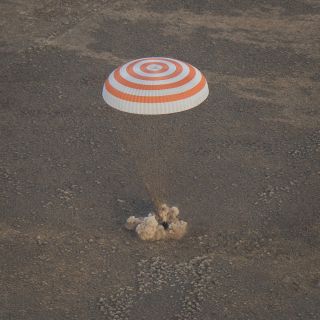 A Soyuz MS-01 space capsule lands safely on Earth to return astronauts for NASA, Japan and a Russian cosmonaut back to Earth. The Soyuz landed in a remote region of Kazakhstan on Oct. 30, 2016 local time (late Oct. 29 EDT).
(Image: © NASA/Bill Ingalls)

Three space travelers are safely back on Earth after a 115-day stay on the International Space Station.

Returning on a Russian Soyuz space capsule, U.S. astronaut Kate Rubins of NASA, Russian cosmonaut and Expedition 49 Commander Anatoly Ivanishin of Roscosmos and Japanese astronaut Takuya Onishi landed near Kazakhstan at 9:58 a.m. local time on Sunday (Oct. 30), or 11:58 p.m. EDT (0358 GMT). You can see how the landing went in this NASA video.

"Touchdown confirmed," NASA spokesman Rob Navias said during the agency's landing webcast commentary. "After a journey of 115 days and 48.9 million miles, the Expedition 49 crew is home."

This was the first spaceflight for Rubins and Onishi. Ivanishin flew to the station in 2011 as a member of Expeditions 29 and 30. During her time in orbit, Rubins participated in a spacewalk to install an international docking adapter, which will allow commercial vehicles to dock with the station in coming years. She also became the first person ever to sequence DNA in space.

When questioned my members of the landing recovery team, Rubins said she was feeling "better than expected" after the landing.

"What do you need right now," one team member asked.

"To sit here and enjoy the Earth," Rubins replied.

Ivanishin handed over command of the station yesterday (Oct. 28) to NASA astronaut Shane Kimbrough, who remains on the station with Russian cosmonauts Andrey Borisenko and Sergey Ryzhikov.