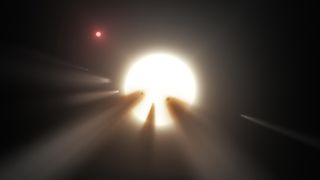 Artist's illustration showing a cloud of comet fragments blocking light from a star — one of the possible explanations for the strange, occasional dimming of “Tabby’s Star.”
(Image: © NASA/JPL-Caltech)

If intelligent aliens actually do live around Tabby's star, astronomers are determined to find them.

The Breakthrough Listen initiative, which will spend $100 million over the next 10 years to hunt for signals possibly produced by alien civilizations, is set to begin studying Tabby's star with the 330-foot-wide (100 meters) Green Bank Telescope in West Virginia, project team members announced Tuesday (Oct. 25).

"The Green Bank Telescope is the largest fully steerable radio telescope on the planet, and it's the largest, most sensitive telescope that's capable of looking at Tabby's star given its position in the sky," Breakthrough Listen co-director Andrew Siemion, who also directs the Berkeley SETI (Search for Extraterrestrial Intelligence) Research Center at the University of California, Berkeley, said in a statement. [13 Ways to Hunt Intelligent Alien Life]

"We've deployed a fantastic new SETI instrument that connects to that telescope, that can look at many gigahertz of bandwidth simultaneously and many, many billions of different radio channels all at the same time so we can explore the radio spectrum very, very quickly," Siemion added.

The observations will take place for 8 hours per night for three nights over the next two months, with the first observations set to take place Wednesday (Oct. 26), project team members said.

Tabby's star, officially known as KIC 8462852, lies about 1,500 light-years from Earth. Observations by NASA's Kepler space telescope showed that the star dimmed dramatically several times over the past half-decade or so, at one point by a whopping 22 percent. These occasional brightness dips — which were first reported last year by a team led by Yale University postdoc Tabetha Boyajian (hence the star's nickname) — are far too substantial to be caused by an orbiting planet, astronomers have said.

So researchers have offered up a number of alternative explanations for the dimming to date. Perhaps a cloud of comet fragments periodically blocks the star's light, for example, or maybe some unknown structure in the depths of space between Earth and Tabby's star is responsible.

It's even possible that the brightness dips are caused by an "alien megastructure" — an enormous collection of energy-gathering solar panels, for example.

Astronomers have stressed that the megastructure hypothesis is a long shot, but long shots shouldn't be dismissed out of hand, Breakthough Listen team members said.

"I don't think it's very likely — a one-in-a-billion chance or something like that — but nevertheless, we're going to check it out," Dan Werthimer, chief scientist at Berkeley SETI, said in the same statement. "But I think that E.T., if it's ever discovered, it might be something like that. It'll be some bizarre thing that somebody finds by accident … that nobody expected, and then we look more carefully and we say, 'Hey, that's a civilization.'"

A number of other research teams have already searched for signals coming from Tabby's star, and all of those searches have come up empty so far.

Siemion, Boyajian and astronomer Jason Wright, who's based at Pennsylvania State University, will discuss the planned Tabby's star observations during a video chat from the Green Bank Telescope site on Wednesday at 4 p.m. EDT (2000 GMT). You can watch it live here: https://www.youtube.com/watch?v=Ijyn0kAMTL8.