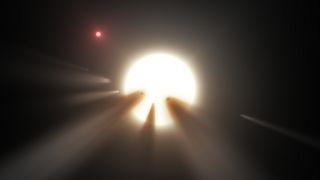 Artist's illustration showing a shattered comet passing in front of a star — perhaps the leading explanation at the moment for the strange dimming observed in the KIC 8462852 system.
(Image: © NASA/JPL-Caltech)

It's looking less and less likely that a faraway star's strange dimming was caused by some kind of "alien megastructure."

Observations by NASA's Kepler space telescope recently revealed that the star KIC 8462852's brightness dipped dramatically several times over the past few years, by 22 percent on one occasion.

Such dimming events are too significant to be caused by a planet crossing the star's face — Jupiter passing in front of the sun would dim our star by just 1 percent or so — so some astronomers have speculated that the KIC 8462852 system might harbor a giant complex of orbiting solar panels or some other structure built by an intelligent alien civilization. [13 Ways to Hunt Intelligent Alien Life]

In a test of this hypothesis, a team of scientists hunted for signs of potential laser communications coming from KIC 8462852, which lies about 1,500 light-years from Earth. But this search — which took place over six nights from Oct. 29 through Nov. 28, using the Boquete Optical SETI Observatory in Panama — came up empty, the researchers report in a new study.

"We found no evidence of an advanced civilization beaming intentional laser signals toward Earth," study co-author Douglas Vakoch, president of SETI (Search for Extraterrestrial Intelligence) International in San Francisco, said in a statement.

On three of the six nights, study team members also hunted for radio signals in the vicinity of KIC 8462852 using the Allen Telescope Array (ATA) in northern California. This joint ATA-Boquete work was a test of SETI coordination, Vakoch explained.

"If some day we really detect a signal from an extraterrestrial civilization, we need to be ready to follow up at observatories around the world, as quickly as possible," he said in the same statement.

The ATA, a system of 42 radio dishes, also detected nothing of note.

"The hypothesis of an alien megastructure around KIC 8462852 is rapidly crumbling apart," Vakoch said.

The new study, which was led by Marlin Schuetz of SETI International and the Boquete Optical SETI Observatory, has been submitted to The Astrophysical Journal Letters. You can read it for free at the online preprint site arXiv.org.

The leading explanation for KIC 8462852's bizarre brightness dips may be a family of comets on a long, elliptical orbit around KIC 8462852. These comets, or comet fragments, may have blocked KIC 8462852's light in 2011 and 2013, while Kepler was viewing the system, then zoomed off into deep space, a separate research team suggested in a recent study.

Kepler's observations of KIC 8462852 ended in 2013, when the observatory lost the second of its four orientation-maintaining reaction wheels. This failure ended the prolific planet-hunting telescope's original mission and led to the formulation of a new mission called K2, during which Kepler searches for exoplanets on a more limited basis but also observes other cosmic objects and phenomena.