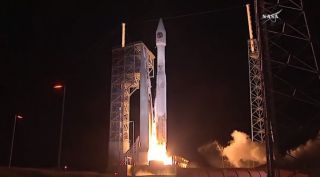 WASHINGTON — United Launch Alliance says it has identified and resolved the problem on its most recent Atlas V launch, a March 22 flight for Orbital ATK that successfully delivered the unmanned Cygnus space station resupply vehicle to orbit.

In a statement June 15, the Denver-based company said an "unexpected shift in fuel pressure differential" across a mixture ratio control valve in the RD-180 engine, nearly four minutes after liftoff, caused the engine to run oxidizer-rich.

That depleted the supply of liquid oxygen and shut down the engine prematurely, even though there was still "significant fuel" left on the first stage. Atlas V's Centaur upper stage compensated for the first stage performance shortfall with an extended burn, delivering Cygnus to its intended orbit "well within the required accuracy."

ULA said the engine supplier, NPO Energomash, has made a minor change to the valve to prevent that problem from taking place again, and that change has been verified in hot-fire tests.

The Atlas V is set to return to flight June 24 with the launch of the U.S. Navy's MUOS 5 military communications satellite . Liftoff from Cape Canaveral's Space Launch Complex-41 is scheduled to occur between 10:30 a.m and 11:14 a.m. EDT.