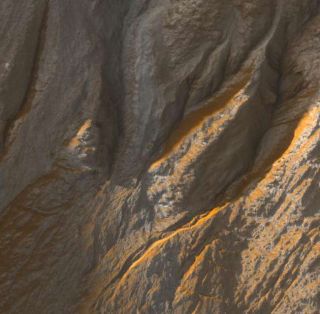 This enhanced-color view shows gullies in an unnamed crater in the Terra Sirenum region of Mars. It is a sub-image from a larger view imaged by the High Resolution Imaging Science Experiment (HiRISE) camera on NASA's Mars Reconnaissance Orbiter on Oct. 3, 2006. This scene is about 254 meters (about 830 feet) wide.
(Image: © NASA/JPL/Univ. of Arizona.)

The MarsReconnaissance Orbiter (MRO) is still weeks away from beginning its plannedscience mission, but the immense probe has thrilled scientists with initialimages and data pointing to a variable polar environment, ancient soakingevents that produced clays, and relatively new--geologically speaking--gulliescarved into the shadowed rim of a southern crater.

"We haveanother new Mars," said Steve Saunders, MRO program scientist at NASA'sWashington D.C. headquarters, in a mission briefing. "Every time we go to Marswith a new set of instruments, we see a different planet."

"During ourcheck-out period we were deliberately picking places that we knew about andthat would help us in our [instrument] calibration," said NASA's Rich Zurek,MRO project scientist at the Jet Propulsion Laboratory (JPL) in Pasadena, California. "Now we're going to find new areas as well."

"At thenorth polar ice cap over the last 100,000 or so years, there's been a reallydynamic history of changes reported in layers of ice much like we woulddetermine Earth's climate change and looking at a core of ice from Greenland,"said Scott Murchie, of Johns Hopkins University's Applied Physics Laboratory,who serves as lead scientist for MRO's imaging spectrometer.

The imagingspectrometer also spied a wide range of mineral-rich clays on Mars in a regionknown as Mawrth Valles; some rich in iron while others nearby containedaluminum.

"Clay tellsus that the surface was wet, and differences in the mineralogy tells us how theenvironment may have been different from place to place," Murchie said, addingthat differences in clay composition can indicate variations in watertemperature, salinity and other characteristics in the site's past. "What thisis telling us is that on length scales of just a few hundred yards, theconditions were varying significantly enough that entirely different kinds ofminerals were forming."

MRO's HighResolution Imaging Science Experiment (HiRISE) camera--an all-seeing eye sopowerful it can resolve objects the size of people and recentlyphotographed the NASA roverOpportunity on the rim of Victoria Crater [image]--alsofound evidence of channels around Mawrth Valles to support its ancient wateryhistory, researchers said.

HiRISE alsophotographed a series of young gullies etched into the shadowed, frost-riddenwall of an unnamed Martian crater in the TerraSirenum region.

"Whatimpresses me most is that this is really a system of gullies, this is a complexlandform," said Alfred McEwen, HiRISE principal investigator at the Universityof Arizona, adding that they may have been carved by flowing water in the past."The big question here is, 'Is water seeping to the surface today?' and rightnow we don't have a smoking gun."

MRO hasbeen circling Mars since it arrivedat the red planet in March, but only settled into its finalscience orbit last month. Launchedon Aug. 12, 2005, the spacecraft carries enough fuel to last through 2018. Fullscience operations will begin Nov. 7 after the red planet has passed behind theSun.

"We're justat the start of our data acquisition period and it's a little daunting to thinkthat, very soon, we'll be opening up a fire hose of data from the spacecraft,"Zurek said. "Our appetites are whetted and we're excited to get started."