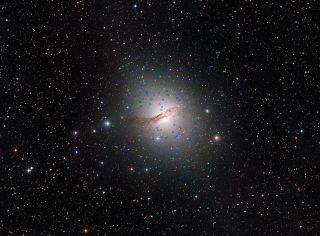 This huge elliptical galaxy NGC 5128 (also known as Centaurus A) is the closest such galaxy to the Earth, at a distance of about 12 million light-years. Observations with ESO’s Very Large Telescope in Chile have discovered a new class of “dark” globular star clusters around this galaxy. These are marked in red. Normal globulars are marked in blue and globulars showing similar properties to dwarf galaxies are in green.
(Image: © ESO/Digitized Sky Survey. Acknowledgement: Davide De Martin)

Astronomers studying the globular star clusters orbiting the giant elliptical galaxy Centaurus A (NGC 5128) have stumbled upon a fascinating discovery — the clusters are too massive.

What does this mean? Well, it could be that each of the dozens of clusters studied are packed with dark matter or may even by hiding a massive black hole, but neither of the explanations make any sense.

Globular star clusters are ancient ensembles of thousands of stars that can be found orbiting galaxies like our Milky Way. Their study is critical to help us understand how galaxies on the whole evolve as the stars they are known to contain are often as old as the galaxies they orbit.

"Globular clusters and their constituent stars are keys to understanding the formation and evolution of galaxies. For decades, astronomers thought that the stars that made up a given globular cluster all shared the same ages and chemical compositions — but we now know that they are stranger and more complicated creatures," said Matt Taylor, a PhD student at the Pontificia Universidad Catolica de Chile, Santiago, Chile, and lead author of the study.

Using the FLAMES instrument on the ESO's Very Large Telescope at the Paranal Observatory in Chile, Taylor and his team surveyed 125 of the around 2,000 globular clusters in orbit around Centaurus A and gauged their masses. Usually, the mass of a globular cluster can be derived by measuring their brightness. The brighter the cluster, the more stars it has and the more massive it is.

Naturally, the researchers' suspicions are focusing on these clusters amassing a reservoir of dark matter. But globular star clusters are not thought to contain significant quantities of invisible stuff. Perhaps, therefore, these islands of stars have massive black holes in their cores, or maybe a massive graveyard of other stellar corpses, like the burnt-out husks of stars like neutron stars? For now, where this extra baggage comes from remains mystery.

"Our discovery of star clusters with unexpectedly high masses for the amount of stars they contain hints that there might be multiple families of globular clusters, with differing formation histories. Apparently some star clusters look like, walk like, and smell like run-of-the-mill globulars, but there may quite literally be more to them than meets the eye," added co-author Thomas Puzia, also at the Pontificia Universidad Catolica de Chile.

NEWS: Hubble Stares Into the Heart of an Ancient Star Cluster

To widen the search, the researchers are now carrying out a survey of other globular clusters around other galaxies in the hope of finding more of these mysterious "dark clusters."

"We have stumbled on a new and mysterious class of star cluster! This shows that we still have much to learn about all aspects of globular cluster formation. It's an important result and we now need to find further examples of dark clusters around other galaxies," concluded Taylor.