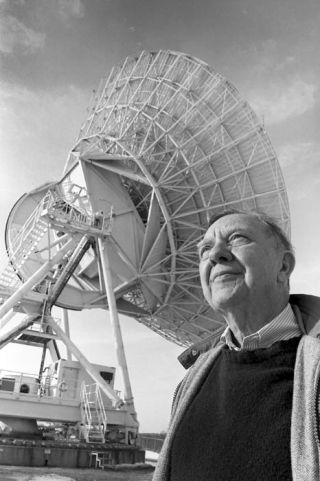 U.S. space pioneer James Van Allen at one of 10 radio-telescope antennas across the globe that make up the Very Long Baseline, February 1994.
(Image: © University of Iowa)

Until his death this month at the age of 91, James Van Allencontinued to do work that had fascinated him since childhood and made him aleading figure of America's Space Age.

Van Allen spent a lifetime exploring the universe, and ismost famous for discovering the radiationbelts circling Earth which now bear his name.

In what would be his last paper, he explored a subject thathits somewhat closer to home: The likelihood of an asteroid colliding with Earth.

The research, published in this month's American Journalof Physics, details how the likelihood of such an event is enhanced by thegravitational pull between the two bodies.

The research shouldn't raise concern about possiblecollisions though, said Dave Tholen, an astronomer at the University of Hawaii. "It can happen, but I wouldn't worry about it. Weare actively discovering near-Earth asteroids and computing their orbits tomonitor the situation."

Tholen saidastronomers are intensely focused these days on an asteroid called Apophis,which is set to pass less than 24,000 miles from Earth on April 13, 2029. Van Allen's paper, which detailshow scientists estimating the probability of a collision should take Earth'sgravitational pull into account, could help researchers calculate whether theasteroid will become a threat.

Colleagues say this and other examples of Van Allen's workare remarkable not only for what he found, but also because of the simpleexperimental designs he employed.

"He really showed that by focusing on the fundamentalquestion and designing simple instruments, you could reveal things about natureyou wouldn't have imagined," said Ed Stone, a physics professor at theCalifornia Institute of Technology.

When the American team launched its first satellite,Explorer 1, into space, Van Allen had the prescience to attach a self-designedradiation detector to it. While the team didn't manage to beat the Russians intospace, his instrument sent back data giving the first evidence of thedonut-shaped ringscircling the Earth.

Working to the end

Frank McDonald, Senior Research Scientist at the University of Maryland, was a post-doctoral student at the University of Iowa during Van Allen's early days there. He worked with him onso-called "rockoons," rockets attached to balloons, which measuredspace radiation even before Explorer 1 went up.

McDonald says the recent paper on asteroids, which hedescribes as more educational than revolutionary, is evidence of Van Allen'scommitment to teaching.

"He was an outstanding mentor, and one of his missions inlife was training students," McDonald said. In addition to teaching science,Van Allen also taught students to be savvy fundraisers for it. "You learnedthat when you wanted to get something from a group, to go in with a statement alreadywritten about what you wanted--whenever I was in D.C., he always urged me tovisit the Office of Naval Research."

That Van Allen would still be publishing into his ninetiescomes as no surprise to McDonald. "You're talking to somebody who just turned81 and comes in every day, so it doesn't surprise me at all. I couldn't imaginehim not doing it and not having him there ten years ahead of me," he said. "And this is a heck of a lot more fun than retiring to Florida. We're still seeing things we neverexpected to see."