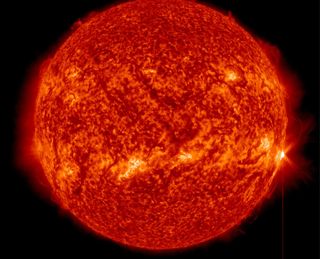 The sun erupted with a massive solar flare late Thursday (April 24), triggering a temporary communications blackout on some parts of Earth.

The powerful flare peaked at 8:27 p.m. EDT Thursday (0027 April 25 GMT), and ranked as an X1.3-class solar storm, one of the strongest types of flares the sun can experience, according to a report from the U.S. Space Weather Prediction Center. NASA's sun-watching Solar Dynamics Observatory captured video of the intense solar flare in several difference wavelengths.

The solar flare erupted from an active sunspot region known as Region 2035 located on the far western side (or limb) of the sun as seen from Earth. Because of its position, the flare sparked a high-frequency radio blackout for about an hour on the daytime side of Earth, most likely over the Pacific Ocean and Eastern Pacific Rim, according to the SWPC update. [Photos: The Biggest Solar Flares of 2014]

"Region 2035 is rotating out of view and won't pose any danger for much longer, but could in the immediate future," SWPC officials wrote in the update.

When aimed directly at Earth, X-class solar flares can endanger astronauts in space, as well as interfere with communications and navigation satellites in orbit. The most powerful X-class flares can also affect power grids and other infrastructure on the Earth.

While X-class flares are the most powerful eruptions on the sun, the star also experiences more moderate M-class solar flares (which can supercharge Earth's aurora displays) and weaker C-class storms.  The sun is currently in an active phase of its 11-year weather cycle, and was expected to reach its peak activity in 2013.

NASA and other space and weather agencies keep watch on the sun's activity using a fleet of spacecraft, including the Solar Dynamics Observatory, NASA's twin STEREO spacecraft and other probes.