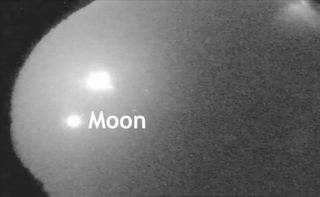 This video still shows a fireball 20 times brighter than the moon light up the night sky over Chickamauga, Georgia on Aug. 28, 2013.
(Image: © NASA/MSFC)

Three of NASA's top meteor and fireball experts will answer questions from the public about the science behind space rocks from the sky today in a Reddit "Ask Me Anything" forum today live at 2 p.m. EST (1900 GMT).

"Cooke, the lead of the NASA's Meteoroid Environment Office, specializes in studying the meteoroid environment and its effects on space vehicles of all sorts. Cooke came to work at NASA's Marshall Space Flight Center as a member of the Space Environments Team in 1994. When not occupied with meteor observations and shower forecasts, he builds model rockets and is a mentor for the Team America Rocketry Challenge and other amateur rocketry projects.

Moser has been working in the Space Environments Team at Marshall for more than 10 years and has supported the NASA meteor environments team since its inception in late 2004. Her work includes modeling meteor showers, analyzing lunar meteoroid impact data and managing the cameras for the NASA All Sky Fireball Network.

Blaauw has more than three years of experience with the Meteoroid Environment Office and came to Marshall from the University of Western Ontario in Ontario, Canada. During her master's studies, she gained experience in meteor physics working with data from a meteor radar. She enjoys the diversity of her projects, which include analyzing automated meteor fluxes from optical detectors, managing wide-field meteor cameras and comet monitoring."