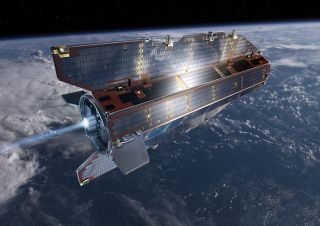 A European gravity-mapping satellite is expected to fall out of space in a few days, though no one knows exactly where its surviving fragments will land.

The fate of European Space Agency's falling GOCE satellite was sealed in October, when the spacecraft ran out of the fuel needed to keep it aloft in a very low orbit above Earth.

Now that the satellite's mission is over, its handlers at the European Space Agency (ESA) are closely tracking its ever-descending orbit to determine where it might fall. [6 Biggest Spacecraft to Fall Uncontrolled from Space]

The GOCE satellite team's best prediction so far is for "a re-entry on Sunday, with a possibility for it slipping into early Monday," Rune Floberghagen, ESA's GOCE mission manager, told The New York Times earlier this week.

Most of the 1-ton (907 kilograms) spacecraft will disintegrate during reentry, but smaller fragments of GOCE will make it all the way to the planet's surface. The Times reported that 25 to 45 fragments of the satellite are expected to survive, with the largest as big as 200 lbs. (90 kg).

The GOCE mission (the name is short for Gravity Field and Steady-State Ocean Circulation Explorer) launched in March 2009 to a very low altitude of 159 miles (255 kilometers). For comparison, the International Space Station circles Earth at a distance of about 249 miles, or 400 km. GOCE was brought even lower in August 2012, to an altitude of just 139 miles (224 km), to improve its measurements of more subtle features on the planet, such as eddy currents.

Now after more than two weeks without fuel, the satellite has dropped to roughly 105 miles (170 km) above the planet's surface, and is quickly falling, ESA officials said on Friday morning (Nov. 8).

"GOCE will drop by more than 8 km today, with the drag now going up rapidly and the final re-entry into the atmosphere drawing closer and closer," Christoph Steiger, operations manager for GOCE, wrote in an update from ESA today (Nov. 8).

The $450 million, 17-foot-long (5.2 meters) satellite had been dubbed the "Ferrari of space" because of its sleek design.

During its mission, GOCE mapped the globe's ocean currents and lumpy gravitational field in unprecedented detail. The spacecraft also produced the first high-resolution map of the boundary between Earth's crust and mantle.

Mission managers want to keep some of GOCE's instruments operating for as long as possible in order to collect scientific data and assess the performance of the spacecraft under the harsh conditions of its descent.

"The spacecraft keeps performing excellently at these extreme conditions, exceeding our expectations," Steiger wrote. "We are still getting good acceleration data from the Gradiometer, which may be of much value for atmospheric density studies … The two scientific GPS receivers — the so-called Satellite-to-Satellite Tracking Instruments (SSTI) — are also still fully operational."