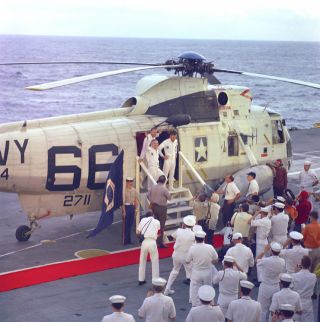 The Apollo 8 Crew stands in the door of a recovery helicopter.
(Image: © NASA.)

In this historical photo from the U.S. space agency, the Apollo 8 crew stands in the doorway of a recovery helicopter after arriving aboard the carrier U.S.S. Yorktown, recovery vessel for the historic initial manned lunar orbital mission. In left foreground is astronaut Frank Borman, Mission Commander. Behind Borman is astronaut James A. Lovell Jr., Command Module pilot; and on the right is astronaut William A. Anders, Lunar Module pilot.