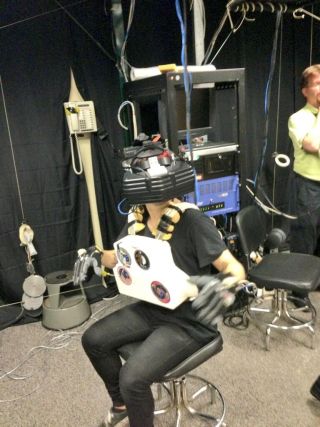 What is Skrillex doing at NASA's Johnson Space Center? The dub-step musical sensation (known for his hit "Bangarang") has been sharing his experiences from the home of the space agency's astronaut corps and Mission Control by posting pictures, videos and messages on Twitter today (May 8).

NASA officials also posted about Skrillex's visit from the Johnson Space Center (@NASA_Johnson) Twitter page. The musician hung around to see astronauts training in the Neutral Buoyancy Laboratory (the largest indoor pool in the world), and NASA officials let Skrillex (@Skrillex) participate in a virtual training mission using the space center's virtual reality lab. The recording artist even had lunch with Mike Massimino (@Astro_Mike), the first NASA astronaut to send a tweet from space.

Famous musicians, movie stars and public officials have visited Johnson Space Center before, but the tours aren't usually publicized, NASA officials have said. Skrillex's trip simply serves as a reminder that even the hippest people on Earth can still be space geeks at heart.