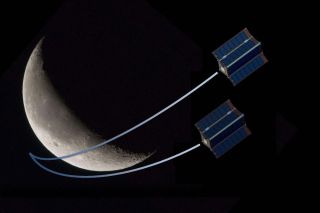 An artist’s illustration of the dual INSPIRE CubeSats, which will be the world's first CubeSats to be launched beyond Earth orbit, will demonstrate functionality, communication, navigation and payload hosting in interplanetary space.
(Image: © NASA/Jesse Allen, using data provided by Tony Song (NASA/JPL))

Two CubeSats, designed by NASA's JPL and three university partners, are soon to go where no CubeSats have gone before: beyond Earth orbit.

The space agency’s twin Interplanetary NanoSpacecraft Pathfinder In Relevant Environment (INSPIRE) satellites, each no larger than a loaf of bread, will be the first CubeSats to leave Earth's orbit for interplanetary space.

CubeSats are tiny satellites, some no bigger than four inches (10 cm) on each side, sent into orbit as secondary payloads on other launch vehicles. The twin INSPIRE CubeSats are "3U" models, each made of three 4x4x4 cubes laid end to end.

Just where the pioneering CubeSats will go is still unclear, however, since it’s not known yet which model rocket will be used for launch, said James Cutler, director of the Michigan Exploration Laboratory at the University of Michigan, Ann Arbor. UMich is one of the three academic institutions (the others are University of Texas and Cal Poly San Luis Obispo) partnering with JPL (Jet Propulsion Laboratory) to develop the craft.

"The first mission will be basically an escape trajectory," meaning it will travel beyond Earth’s gravitational influence, Cutler explained. "The rocket's going to send us in some unknown direction."

Lacking much propulsion or scientific instrumentation, the INSPIRE craft are a test of whether tiny machines can survive the harsh environment of space.

The INSPIRE project has been approved by NASA to launch sometime between 2014 and 2016, but a specific launch vehicle hasn't been selected.

One of the challenges of the project is figuring how the tiny satellites will communicate with Earth. CubeSats are far cheaper than a traditional space mission but they lack room for complex communications systems or large power sources.

"As we head away from Earth, we're talking about using much larger antennas" to communicate with the low-powered craft, says JPL's Dr. Andy Klesh, the principal investigator for INSPIRE. And the tiny spacecraft can send only a small amount of data back.

"In Earth orbit, we can talk in megabits per second, comparable to a cellphone," he says. "Whereas in deep space, we're going back to [the data transmission rates of] early modems."

Furthermore, once a spacecraft leaves the protective magnetic field surrounding Earth, it's at risk of failure from solar radiation. Traditional satellites are built with more expensive "radiation-hardened" components. The INSPIRE satellites are instead built to respond to a shut-down command from Earth if space weather systems detect an oncoming solar flare, Cutler said.

The test will "really push the edges of what the technology can actually do," he added.

INSPIRE is really only just the beginning, however. Cutler imagines a future with CubeSats exploring the whole solar system, or even doing reconnaissance to scout out potentially dangerous or mineral-rich asteroids.

Beyond that, "there's a lot of interesting science we could do at [the Martian moon] Phobos ... certainly some of the moons of Jupiter, or [Saturn’s moon] Titan would be interesting.”