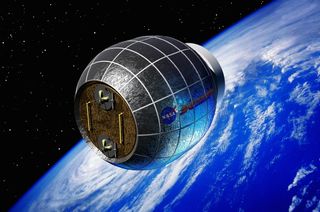 Artist’s conception of the private-sector supplied Bigelow Expandable Activity Module (BEAM) to be launched around the summer of 2015.
(Image: © Bigelow Aerospace)

A new deal between NASA and a commercial spaceflight company to add a privately built module to the International Space Station could lead to future uses of the novel space technology beyond low-Earth orbit, space agency and company officials say.

NASA will pay $17.8 million to Bigelow Aerospace of North Las Vegas to build an inflatable module, test it and prep it for flight. The Bigelow Expandable Activity Module (BEAM) is to be launched around the summer of 2015.

The space agency and Bigelow officials provided details of the contract in a Las Vegas briefing today (Jan. 16).

The new inflatable BEAM will be launched to the International Space Station by a Falcon 9 rocket built by another private spaceflight company, California-based SpaceX. The module will be cocooned inside the unpressurized cargo hold of SpaceX's Dragon capsule atop the Falcon 9. NASA has already purchased the launch of the SpaceX Falcon under a separate Commercial Resupply Services contract.

The module will be installed on an open berth of the station's Node 3 connecting module using a robotic arm. Once it is attached, the inflatable room will be activated by station astronauts, adding to the volume of orbiting laboratory. [Photos: Bigelow's Inflatable Space Station Idea]

Michael Gold, director of Washington, D.C., operations and business growth for Bigelow Aerospace LLC, based in Chevy Chase, Md., said: "With Genesis 1 and 2, Bigelow Aerospace showed the world that it can achieve escape velocity from high costs. We're going to do this again with the BEAM, bringing both innovation and a vital demonstration of affordability to the crown jewel of NASA's human spaceflight program, the International Space Station."

At this time, NASA's planned use of the BEAM is for technology demonstration, to validate experimental expandable habitat technology and let the space agency become more familiar with it, Gold told SPACE.com in an exclusive interview.

"I'm told the BEAM will be acoustically the quietest location aboard the station, due to the non-metallic nature of the structure," he said.

NASA's interest in the module for the International Space Station was first reported on SPACE.com by this reporter in January 2011 — so why the long glide path, some two years, for the project to become a reality?

"The ISS is the pinnacle of the human spaceflight program. NASA went through a thorough amount of analysis prior to agreeing about BEAM … Analysis and study does take time," Gold said. "It demonstrates the attention and commitment to safety and quality that both NASA and Bigelow Aerospace have."

For Bigelow, there is another bonus from having BEAM  attached to the space station: the chance to generate more business.

"Many in the foreign community perceive NASA as the gold star. I can think of no stronger statement relative to NASA's confidence both in Bigelow Aerospace and expandable habitat technology than their desire to place BEAM aboard the ISS," Gold said. "That speaks volumes not just domestically, but possibly more importantly, overseas as well. I think that any sovereign client or potential clientele should be paying attention to this.”

Gold said the private entrepreneurial firm is pleased to be working with NASA to further validate the promise and benefits of expandable habitat technology – and not only in low-Earth orbit, but beyond.

Beyond BEAM, Bigelow Aerospace is "moving aggressively" on the larger BA 330 module, "dedicating a great deal of resources" to expeditiously push forward an expandable habitat of that size.

According to the Bigelow Aerospace website, the BA 330 can function as an independent space station, and several BA 330 habitats can be connected together in a modular fashion to create an even larger and more capable orbital space complex.

Robert Bigelow and his team have extensively blueprinted concepts for their expandable habitats to be used at other destinations.

"Expandable habitats are an enabling technology that will make the dream of robust beyond-LEO human space exploration a reality," Gold said. "Regardless of the ultimate destination, be it L2 [Lagrange Point 2], the surface of the moon or even a historic mission to Mars, the large volumes provided by Bigelow Aerospace systems, combined with enhanced protection from radiation and physical debris, make habitats such as the BA 330 an essential part of any realistic beyond-LEO architecture."

Gold said he knows Capitol Hill wants to see a robust beyond-LEO human space exploration strategy, but that new funding will be hard to come by.

“The BA 330 and expandable habitats will not just offer enhanced protection from radiation and micrometeorites, but protect future astronauts from a much more dangerous threat …lack of funding," Gold concluded.