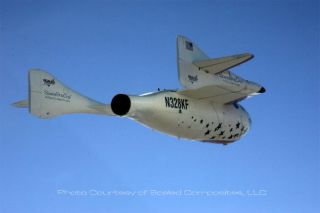 SpaceShipOne glides back to home base during June 21 flight as shown in this air-to-air photograph. Note dent underneath rocket motor fairing. While the craft threw several surprises at pilot Mike Melvill, technical problems that cropped up during the suborbital trip now appear resolved. Image
(Image: © Scaled Composites, LLC)

The roar from SpaceShipOne as it blasted into the history books last month, along with the media frenzy that surrounded the first private suborbital spacecraft launch, has long since dissipated; but a ripple of hope about the future of public space travel remains.

At the Mojave Airport Civilian Aerospace Test Center in Mojave, California where SpaceShipOne was launched -- and what has been federally anointed as an inland spaceport -- rumors abound. It is also home base for SpaceShipOne's dream team of engineers at Scaled Composites, led by aerospace trendsetter, Burt Rutan.

In several of the Mojave Airport hangars that dot the complex, still-secret projects constitute what one local calls "Rutanland". But what might be waiting in the wings remains a mystery.

Billionaire Paul G. Allen, co-founder of Microsoft, is already backing Rutan's space adventure, shelling out in excess of $20 million so far. Then there are the rumbles about multiple investors willing to pool their resources for bigger, better and more expensive-to-build spaceships capable of orbital flight.

No doubt, such gossip was fueled by one spectator at SpaceShipOne's last voyage, the flamboyant British billionaire, Richard Branson. Like Allen, he too shares a zeal for passenger space travel, perhaps eager to add a spaceliner to his Virgin Atlantic Airways fleet.

When it comes to future spaceships, SpaceShipOne's creator is tight-lipped -- although before and after the June 21st flight of the spacecraft, Rutan sketched out travel tips for future space trekkers.

"One of our lessons learned from this program is that it's a very good idea to not reveal to the media what we're doing until after," Rutan said. Giving press statements and carrying out interviews would mean a year delay, in regards to SpaceShipOne work, he added.

"So you're not likely to find out what we're going to do next until we have to push it outside, where that spy gets a camera in and takes a picture," Rutan told reporters the day before SpaceShipOne rocketed into history.

Just like the early days of aviation, Rutan said, there will be barnstorming-like flights as vehicles give passengers a brief sub-obital flight relatively soon. "The crazy $100,000 stuff," he added.

When pressed on when passenger-carrying spaceships will show up on the scene, Rutan remained cagey. "All I ask you to do is stay tuned. I think it's going to be interesting. I believe there will be a lot of activity."

Rutan is upfront about suborbital ships in contrast to vehicles capable of plowing into Earth orbit.

"Suborbital tourism you don't go to a destination," Rutan explained. He favors multi-passenger ships that rocket upwards of 90 miles (150 kilometers), then freefall back to Earth. That gives a person time to un-strap and float around.

But for future suborbital craft, those vehicles must have two key ingredients. "You have got to give everyone a large window," Rutan stressed, for a person to have personal face-time with the spectacular view. And give them a lot of room too.

"So I believe those that survive in the business of suborbital space tourism airlines, call it what you want, it has to a very spacious thing, with very large windows. I'm not a business guy, but I've run some numbers. I really think it needs to have at least five, maybe six seats," Rutan advised.

Slipping into high gear, public space jaunts into orbit need to be destination driven, Rutan explained. "I don't think orbital space tourism makes sense to fly in a vehicle where you stay in it for your vacation...because it has to be small and cramped."

Rutan said that a space motel or resort hotel is a perfect stopover spot. "I absolutely refuse to use the word 'shuttle'...I use 'transfer van'. Think of it as the transfer van you take to your resort hotel. A transfer van is needed for orbital space tourism."

Lofty thoughts: back on Earth

While Rutan clearly has lofty thoughts, there is still the day-to-day decision-making regarding forthcoming missions of suborbital SpaceShipOne.

One pacing item: The clock is ticking on the $10 million Ansari X Prize. Rutan and company must provide a 60-day notice that SpaceShipOne is ready to fly back-to-back missions in an attempt to snag the purse. That cash offer runs out January 1, 2005.

This international competition can be won by the first team to create a reusable aircraft that can launch three passengers into suborbital space, return them safely home, then repeat the launch within two weeks with the same vehicle.

Pulling off the history-making mission on June 21 was not without problems.

Flying solo, Mike Melvill dug into his carry-on bag of piloting skills to handle troubles that cropped up. Those glitches resulted in what Scaled Composites engineers termed a "trajectory excursion". First, the vehicle didn't climb as high as planned. Secondly, the rocketship reentered south of the intended recovery point. Nevertheless, the excursion was well within the vehicle's glide capability. SpaceShipOne made a normal touchdown at the Mojave Spaceport.

Rutan told SPACE.com this week that, indeed, multiple tracking systems were used during SpaceShipOne's rip-roaring flight, including radar at the Naval Weapons Lab at China Lake, as well as hardware situated at neighboring Edwards Air Force Base.

"All three sets of data show we exceeded 100 kilometers altitude," Rutan said. "We did not reach our goal of 360,000 feet (110 kilometers), mainly due to trajectory errors caused in part to wind shears during the initial pull-up and high trim requirements late in the burn."

Rutan noted that the vehicle's trim system did not fail. "We merely had a momentary lockout of one actuator when it was forced to a stop, which resulted in a roll miss-trim. As a precaution, we continued the flight using backup trim rather than doing an in-flight operation of a possibly-failed primary trim system."

Is there need for a SpaceShipOne re-flight to check out handling issues before X Prize back-to-back flights?

Post-flight ground checks, Rutan added, showed that all systems were operating properly and data analysis pinpointed the details of the anomaly. "We currently do not plan additional flights," he explained.