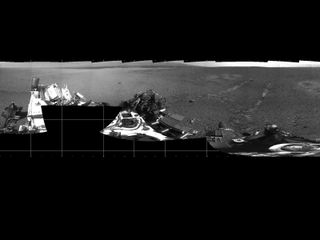 NASA's Mars rover Curiosity took this panorama on Mars on Aug. 22, 2012, just after its first test drive. The landing site has been named "Bradbury Landing" in honor of the late sci-fi author Ray Bradbury.
(Image: © NASA/JPL-Caltech)

Today's short jaunt, combined with a test of Curiosity's steering abilities on Monday (Aug. 20), suggest that the rover is in fine shape to start roaming across the Martian landscape, researchers said.

Curiosity touched down inside Mars' huge Gale Crater on the night of Aug. 5. Its two-year mission, officially known as the Mars Science Laboratory (MSL), aims to determine if the Red Planet could ever have supported microbial life.

Since Curiosity hit the red dirt, the MSL team has been systematically vetting the $2.5 billion rover and its 10 science instruments, making sure everything is in good working condition for surface operations. The driving and steering tests are part of those checkouts.

Everything has gone well so far, team members have said, though Curiosity's weather station is not working perfectly. Wind sensors on one of the instrument's two booms have been damaged, perhaps by rocks deposited on Curiosity's deck during or shortly after landing.

But the other boom's sensors are working fine, so the impact should be limited to some slight ambiguity regarding wind direction, researchers have said.

Curiosity remains at its landing site, which the MSL team has named "Bradbury Landing" to honor the late sci-fi author Ray Bradbury, who would have turned 92 today. Researchers will continue to run tests over the coming days, and the rover will study nearby rocks. It has already zapped a number of stones with its onboard laser to determine their chemical composition.

If Curiosity continues to ace its checkouts, it could head toward its first major science target — a spot 1,300 feet (400 m) away called Glenelg — in the next week or so, scientists said. Three different types of terrain come together at Glenelg, making it a one-stop shop for lots of science investigations.

The first drives toward Glenelg will likely be relatively short — on the order of 33 feet (10 m), Heverly said. Drivers would then gradually start pushing Curiosity over longer distances if the rover continues to perform well, eventually reaching 330 feet (100 m) or so on a big driving day.

Curiosity will probably spend a month or more journeying to Glenelg, researchers have said, and then remain there for a while, studying the site's rocks and soil.

But the rover's ultimate destination is the base of Mount Sharp, the 3.4-mile-high (5.5-kilometer) mountain rising from the center of Gale Crater. Mars-orbiting spacecraft have spotted evidence of clays and sulfates in Mount Sharp's foothills, suggesting the area was exposed to liquid water long ago.

Curiosity may be ready to turn its wheels toward these interesting deposits, which are about 5 miles (8 km) away as the crow flies, around the end of the year, scientists have said.

While nothing is guaranteed, early indications are that the rover should be ready for the long trek.

"It is fantastic how well everything is working," said Michael Meyer, lead scientist for NASA's Mars Exploration Program. "We have high hopes that this is going to really prove out this region, and tell us whether or not it was ever potentially habitable."