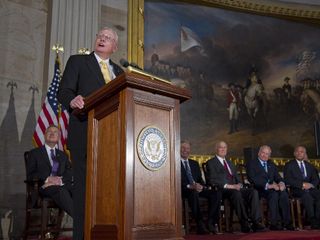 Apollo 11 Commander Neil Armstrong speaks to Congress at a ceremony that honored fellow astronauts John Glenn, Buzz Aldrin and Michael Collins. Each received a Congressional Gold Medals during the ceremony in the Capitol Rotunda on Nov. 16, 2011.
(Image: © NASA/Paul Alers)

American icon Neil Armstrong, the first man ever to walk on the moon, was recovering from heart surgery Wednesday (Aug. 8), with well-wishes pouring in from NASA.

Armstrong, who celebrated his 82nd birthday Sunday, underwent cardiac bypass surgery on Tuesday after a health checkup, according to NBCNews.com, which stated that the celebrated astronaut is doing well.

"NASA wishes Neil Armstrong the very best for a quick recovery from surgery," NASA Administrator Charles Bolden said in a statement. "Neil's pioneering spirit will surely serve him well in this challenging time and the entire NASA Family is holding the Armstrong family in our thoughts and prayers. I know countless well-wishers around the world join us in sending get well wishes to this true American hero."

Armstrong launched onto the world stage in July 1969, when he commanded NASA's Apollo 11 mission to make the first manned moon landing. Armstrong and Apollo 11 lunar module pilot Buzz Aldrin landed their Eagle module on the moon's Sea of Tranquility on July 20, 1969, while crewmate Michael Collins orbited above in their command module Columbia. [Photos of Neil Armstrong on the Moon]

"Just heard about Neil & heart surgery today," Aldrin, also 82, wrote in a Twitter post today. "Sending my best wishes for a speedy recovery. We agreed to make it the 50th Apollo Anniv. in 2019."

Armstrong and Aldrin spent 21 hours and 36 minutes on the moon and performed the first moonwalk during their historic mission. Five more Apollo moon landings would follow before the program ended in 1972.

Cernan told NBCNews.com that Armstrong is doing well after surgery and expected to make a good recovery.

While Armstrong's Apollo 11 moon landing mission may be his most well-known spaceflight, the astronaut also served as the command pilot for NASA's Gemini 8 mission in 1966, during which he performed the first successful docking of two vehicles in space, according to NASA records. A Navy aviator by training, Armstrong joined NASA's astronaut ranks in 1962 after years as a test pilot, during which time he flew the X-15 experimental rocket plane among other aircraft.

After the Apollo 11 mission, Armstrong taught aerospace engineering at the University of Cincinnati and later served as chairman of Computing Technologies for Aviation, Inc., Charlottesville, Va., according to NASA. He and his wife live in the Cincinnati area.

In the years since his historic moon landing, Armstrong has rarely returned to the public spotlight, though recently he has spoken at several congressional hearings on the future of NASA's human spaceflight program.

In November 2011, Armstrong and his Apollo 11 crewmates Aldrin and Collins were awarded the Congressional Gold Medal, the highest award of Congress. Former astronaut John Glenn, the first American to orbit Earth, also received the award during the ceremony.