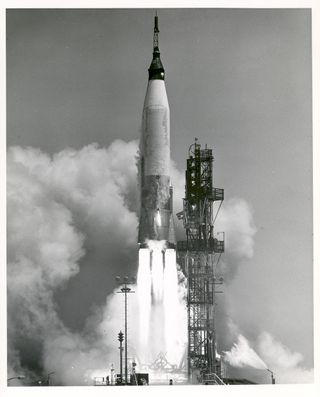 In this historical photo from the U.S. space agency, a NASA Project Mercury spacecraft was test launched at 11:15 AM EST on April 25, 1961 from Cape Canaveral, Florida, in a test designed to qualify the Mercury Spacecraft and all systems, which had to function during orbit and reentry from orbit. The Atlas launch vehicle was destroyed by the Range Safety Officer about 40 seconds after liftoff. The Mercury spacecraft separated and was recovered.

Atlas was designed to launch payloads into low Earth orbit, geosynchronous transfer orbit or geosynchronous orbit. NASA first launched Atlas as a space launch vehicle in 1958, and the rocket ultimately was successful. Project SCORE, the first communications satellite that transmitted President Eisenhower's pre-recorded Christmas speech around the world, was launched on an Atlas. For all three robotic lunar exploration programs, Atlas was used. Atlas/ Centaur vehicles launched both Mariner and Pioneer planetary probes.