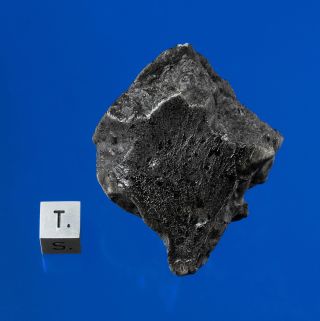 A sample of a Mars rock from the Tissint meteorite fall, which dropped chunks of the Red Planet into the Morocco desert in July 2011.
(Image: © © 2011 Darryl Pitt / Macovich Collection)

A hail of Martian meteorites crashed to Earth last July, and collectors and scientists around the world are snapping up the ultra-rare rocks for display and study.

The meteorites fell in the Moroccan desert in July and were recovered a few months later. Scientists confirmed today (Jan. 17) that the rocks are Martian, presumably blasted off the Red Planet by an asteroid strike.

The rocks are a rare treat for researchers, allowing them to investigate relatively pristine chunks of Martian material. Such freshly delivered pieces of the Red Planet have been found on only four other occasions, the last time in 1962.

As a result of their scarcity and scientific value, the rocks are selling for incredibly high prices — 10 times the price of gold or more. News of the meteorites' Martian origin was first reported by the Associated Press.

"In the world of meteoritics, a fall is as good as it gets," said Carl Agee, director of the Institute of Meteoritics and meteorite curator at the University of New Mexico. "We know that everything we're looking at is Martian, and that there's nothing in there that is confusing matters." [7 Biggest Mysteries of Mars]

Martian material is exceedingly hard to come by on Earth. Just 220 pounds (100 kilograms) of Mars rocks are known to exist on our planet, according to Darryl Pitt, curator of the Macovich Collection of meteorites in New York City.

The newfound Martian meteorites — which are called Tissint, after the shower that dropped them to Earth — represent a significant percentage of this material.

Pitt said he had acquired more than 4.4 pounds (2 kg) of Tissint meteorites. He has been trading and selling pieces to collectors, museums and researchers around the globe, at prices ranging from $8,500 per ounce to $28,350 per ounce ($300 to $1,000 per gram), depending on the sample.

"It's pristine material," Pitt said. "Five hundred dollars and $600 a gram for a freshly fallen chunk of the planet Mars? I'd say that's a deal."

The other four fresh Martian meteorite falls occurred in 1815, 1865, 1911 and 1962. Scientists get excited by the chance to study such rocks because they haven't been contaminated much by Earth organisms and weather.

The Tissint samples, and others like them, thus represent the next best thing to a Martian sample-return mission, something many scientists long for but remains perhaps a decade away in the best-case scenario.

Researchers can glean a surprising amount of information about Mars from a small piece of the planet, said Agee, who acquired several Tissint samples for his institution.

For example, pristine Mars meteorites can reveal a great deal about the Red Planet's atmosphere and climate, along with its potential to host life. Some scientists will doubtless pore over Tissint specimens for signs of organic compounds, the carbon-containing building blocks of life as we know it, Agee said.

"Because it's so fresh, if you find organics in this sample, you can be pretty sure those organics are Martian," he told SPACE.com.

There's also the chance that Martian organisms — if they ever existed — may have left a mark in the meteorite samples. Some researchers, for example, claimed to have found fossil evidence of ancient Martian life in a meteorite called ALH84001, which was discovered in Antarctica in 1984. (Most scientists regard the claim as unconvincing.)

Researchers don't yet know how old the Tissint samples are — when they formed, and when they were blasted off the Red Planet. But that should be determined in the next few months, Agee said.

The large size of the newfound fall is also a blessing, ensuring that Martian rocks are studied and seen by many people around the world, he added.

"Everybody has access at this point," Agee said. "It will be widely distributed, so everybody will get a chance to study it, enjoy it and appreciate it."