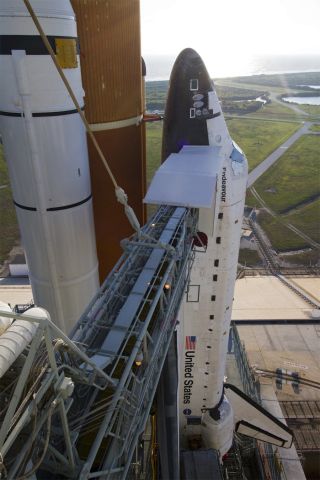 NASA is now aiming to launch the space shuttle Endeavour on its final flight no earlier than May 16 – pushing the mission back another week to give ground crews more time to complete and test repairs to the orbiter.

Top NASA managers met this afternoon (May 6) to assess progress on repairs to failed heaters that caused the agency to call off its first launch attempt on April 29. The heaters protect a crucial power unit, and without them, the unit would likely freeze on orbit and be unable to serve its role as one of three power sources for Endeavour's hydraulic systems during re-entry and landing.

"Space shuttle Endeavour will launch no earlier than Monday, May 16 at 8:56 a.m. EDT," NASA officials said via Twitter.

Technicians worked on repairs all week and will continue to test the electrical circuitry that caused the initial postponement of Endeavour's STS-134 mission. Repair work will continue through the weekend, NASA officials said, and mission managers will hold a news briefing on Monday (May 9) to discuss the status of the work.

Workers at NASA's Kennedy Space Center in Cape Canaveral, Fla., spent last weekend inspecting the problem, and traced it back to a broken control box that sends power to the heaters. They have since removed the old box, called a Load Control Assembly-2 (LCA-2), and replaced it with new one on Wednesday (May 4). [Photos: Shuttle Endeavour's Final Voyage]

Endeavour is slated to carry six astronauts, an astrophysics experiment, and a shipment of spare parts to the International Space Station. The STS-134 mission is scheduled to last 14 days, but NASA hopes to add two extra days in orbit to allow the astronauts to complete more work. [Gallery: Space Shuttle Endeavour Construction Photos]

Endeavour's crewmembers returned to Houston, where they live and train, after their launch delay. The crew will continue training until a new launch date has been set.

After Endeavour's flight, NASA has only one more space shuttle mission planned. The shuttle Atlantis is scheduled to lift off June 29 for its last journey to the International Space Station. However, if Endeavour's mission is delayed much further, NASA has said the Atlantis flight could be pushed back, too.

Once the orbiters are retired, they will be sent to museums for public display.

Endeavour is bound for the California Science Center in Los Angeles, while Atlantis will go to the Kennedy Space Center's Visitor's Center. Their sister orbiter, Discovery, is marked for the Smithsonian's Air and Space Museum in Washington, D.C. A prototype shuttle called Enterprise, which never made it to space, will be displayed at New York's Intrepid Museum of Sea, Air and Space.