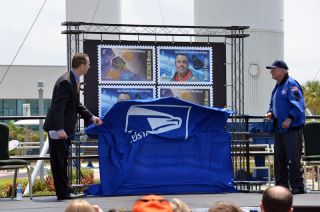 CAPE CANAVERAL, Fla. -- Fifty years after becoming the first U.S. astronaut to fly into space, the late Alan B. Shepard, Jr. was remembered Wednesday with the release of a stamp in his honor. The commemorative postage, which the U.S. Postal Service issued together with another stamp for the first spacecraft to orbit the planet Mercury, is the first ever to show a specific astronaut.

The pair of stamps — or se-tenant as referred to by stamp collectors — were formally introduced during a First Day of Issue ceremony held at NASA's Kennedy Space Center Visitor Complex in Florida. USPS and NASA officials were joined by Shepard's three daughters and his fellow Original Mercury 7 astronaut Scott Carpenter at the event, which took place in the shadow of a replica of the 80-foot rocket that Shepard rode into space on May 5, 1961. [Photos: America's 1st Human Spaceflight]

"I am so pleased ... that the United States Postal Service has chosen to honor Mercury and Alan Shepard with a stamp," Carpenter said.

The stamp's design, which the USPS first previewed last November, shows Shepard centered between images of his Mercury-Redstone 3 rocket lifting off and his Freedom 7 capsule above the Earth.

Opposite the astronaut's portrait on an adjoining stamp is an artist's rendition of NASA's MESSENGER spacecraft, which in March became the first to enter orbit around the planet Mercury.

"They are joined by more than just a name," said Charles Bolden, NASA's Admnistrator, referring to the two stamps' Mercury theme. "They embody the spirit of innovation and doing big things for which NASA has always been known."

First in a decade, first for an astronaut

The two stamps are the first space-themed releases to be offered by the U.S. Postal Service (USPS) in more than a decade. The Shepard stamp also marks the first time the U.S. has honored an astronaut with his own postage.

"In thinking about our father's reaction to this prestigious honor, we realize that Daddy is the only single astronaut to be pictured on a United States postal stamp. It will help people to remember what a great leader for the astronauts he was," said Julie Shepard Jenkins, who was joined at the ceremony by her sisters Laura Churchley and Alice Wackerman. In all, 20 members of Alan Shepard's family attended the ceremony in his honor.

Since the early 1970s, U.S. stamp selection criteria have required an individual be deceased at least five years prior to their being eligible for consideration. Further, events of "historical significance" are limited for commemoration on anniversaries in multiples of 50 years.

Shepard died of leukemia at age 74 in July 1998. Although he was not the first astronaut to pass away, his first flight is the first U.S. manned mission to reach 50 years.

Previous U.S. stamps have depicted scenes from NASA's manned missions including a 1967 issue showing the first American spacewalk and a 1969 commemorative honoring the "First Man on the Moon," but neither explicitly named their depicted subjects as Ed White or Neil Armstrong. In addition, to date all astronauts appearing on stamps have been illustrated wearing their spacesuits, their face hidden by their helmets' visors.

While acknowledging Shepard as the "First American in Space" — as the stamp's inscription reads -- the design omits any reference to him having also been the fifth out of only 12 men to the walk on the moon (and the first and only to hit golf ball off its surface).

The MESSENGER stamp is the third to depict a mission to the closest planet to the Sun, though the first dedicated specifically to the MErcury Surface, Space ENvironment, GEochemistry and Ranging, or MESSENGER, probe. The previous two — issued in 1975 and 1991 — honored the first spacecraft to fly by Mercury, Mariner 10. [Photos of Mercury by MESSENGER]

MESSENGER successfully achieved orbit about Mercury on March 17, 2011, after traveling 6.5 years, completing 15 orbits of the Sun. It is spending the next year mapping the planet's surface.

"It is not easy to capture the significance of these [two] achievements on two stamps but the outstanding artwork of illustrator Donato Giancola of Brooklyn, NY, under the direction of Phil Jordan of Falls Church, Va., have done a wonderful job," said Stephen Masse, the postal service's vice president for finance and planning.

Giancola, who is known for his book cover illustrations for science fiction authors including the late Isaac Asimov and Arthur C. Clarke, worked on the stamp with Jordan, a former art director for Smithsonian Air & Space magazine.

Both first-class stamps, as with all 2011 U.S. issues, are "Forever" denomination, which can be used to mail a one-ounce letter regardless of when the stamps were bought or used, and no matter what the postage rates may be in the future.

"It is I think appropriate to mention another item about this stamp in the wisdom of the United States Postal Service and in viewing the custom of today, a decision was made not to put 44 cents on Al's stamp but it is 'Forever.' That's appropriate to the stamp, but it is also appropriate to the time we should honor and remember Alan B. Shepard and Freedom 7," said Carpenter.

Collectors unable to be at the ceremony in Florida can still request first-day-of-issue cancels by purchasing their own stamps at their local post office and then affixing them to envelopes. The envelopes should be addressed for return (peelable labels are acceptable) and mailed inside a larger envelope to:

Requests for the first-day cancels must be postmarked by July 3, 2011.

The stamps, First Day of Issue ceremony programs, First Day covers and uncut press sheets are also being offered for sale through the USPS website.

Visit collectSPACE.com for photos and coverage of Wednesday’s First Day of Issue Ceremony for the Mercury Project and MESSENGER Mission stamps.