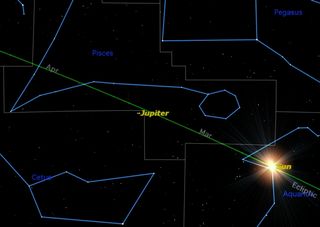 In this sky map, Jupiter appears as it will on March 2, 2011, during its 12-day visit to the constellation Cetus, the Whale.
(Image: © Starry Night Software)

The astrology world has been abuzz recently with the "discovery" of a new zodiac constellation, Ophiuchus. But the planet Jupiter is making a splash in another part of the sky, a cosmic ocean of constellations.

When the International Astronomical Union redrew the constellation boundaries in 1930, they put one corner of Cetus perilously close to the ecliptic – the path that the sun appears to follow in the sky over the course of one year.

The ecliptic (and the sun) neatly miss Cetus, but the planets – because their orbits are not in exactly the same plane as the Earth's – are not always so fortunate.

Jupiter is currently just over a degree south of the ecliptic, which causes it to spend 12 days crossing that little corner of Cetus which pokes up into Pisces. Astronomers measure distances in the sky in degrees, with 10 degrees equal to what your fist held at arm's length can cover.

What does this mean in the real world?

Very little, since the boundaries of the constellations are nothing more than lines drawn arbitrarily on the celestial sphere.

But a similar situation can arise when the planets (or the moon) are close to the border between the constellations Taurus and Gemini. If they are more than half a degree south of the ecliptic, they can slip down into the constellation Orion.