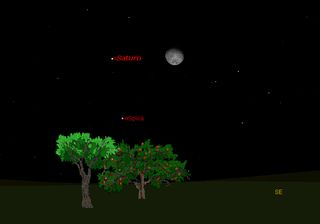 Skywatchers who are out during the late evening hours on Sunday (Feb. 20) with clear skies will have an interesting celestial triangle to admire, composed of Saturn, the moon, and a bright star.

Start by looking low toward the east-southeast sky beginning soon after 10:30 p.m. EST (0330 Feb. 21 GMT). There you will find a nearly full moon, accompanied by the planet Saturn, shining sedately with a yellowish-white glow well above and to the left of the moon. Hovering below and to the left of the moon will be the bright bluish star Spica, located in the zodiacal constellation of Virgo.

This gathering will be similar to a get together these three celestial bodies had last month; a gathering that I christened the "Saturn Triangle."

This sky map of the Saturn Triangle shows how it will appear on Sunday.

Triangle in the sky

Initially, the Saturn Triangle will appear as an isosceles triangle (with at least two equal sides), in that Saturn will be located at an equal distance from both the moon and Spica: 9 degrees. If you hold your clenched fist out at arm’s length, it will cover roughly 10 degrees of the sky.

So, the Saturn-moon and Saturn-Spica sides of the triangle will be slightly less than a fist's width in length. The side of the triangle from the moon to Spica will measure 12 degrees.

But by around 4:30 a.m. EST (0930 GMT), just a little over two hours before sunrise, the trio will have moved to a point low in the west-southwest sky. At this time, the triangle will also look noticeably different.

Saturn is currently 824 million miles (1.326 billion kilometers) from Earth and will not change its position relative to the background stars during the course of a single night. But the moon is only 223,400 miles (359,500 km) away, and as a result, will slowly shift its position to the east during the night.

In fact, the moon appears to move east against the background stars at roughly its own apparent width (1/2 a degree) per hour. As a result, six hours after the trio’s first appearance, the moon will have appeared to move 3 degrees closer to Spica, causing the triangle to appear to become an equilateral, with all three sides measuring 9 degrees in length.

With the moon providing an unmistakable reference point for finding Saturn in the sky, now is a great time for observing the ringed planet. [Photos: Saturn's Rings and Moons]

Saturn is slightly brighter than Spica, and if you have a telescope don't forget to check out Saturn’s rings. Up until Jan. 22, observers on Earth were seeing Saturn's rings become increasingly wider, reaching a tilt of 10.3 degrees to our line of sight.

Since then, however, because of our own movement around the sun, the rings are now appearing to close up a bit. Nonetheless, they are tilted just under 10 degrees toward us, and are readily seen if you are using a telescope with a magnification of at least 30-power.