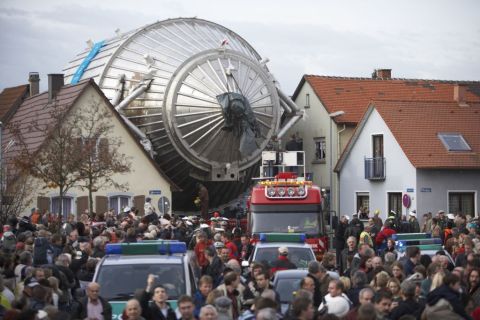 A big, electron-counting machine has indirectly turned up a measurement of the slipperiest known particle in physics — and added to the evidence for dark matter.

That measurement is the first result from an international effort to measure the mass of neutrinos — particles that fill our universe and determine its structure, but which we're barely able to detect at all. Neutrinos, according to the German-based Karlsruhe Tritium Neutrino experiment (KATRIN), have no more than 0.0002% the mass of an electron. That number is so low that even if we tallied up all of the neutrinos in the universe, they couldn’t explain its missing mass. And that fact adds to the pile of evidence for dark matter's existence.

KATRIN is basically a very big machine for counting the super-high-energy electrons that burst out of a sample of tritium — a radioactive form of hydrogen. with one proton and two neutrons in each atom.  Tritium is unstable, and its neutrons decay into electron-neutrino pairs. KATRIN looks for the electrons and not the neutrinos because the neutrinos are too faint to precisely measure. And the machine uses tritium gas, according to Hamish Robertson, a KATRIN scientist and professor emeritus at the University of Washington, because it's the only electron-neutrino source simple enough to get a good mass measurement from.

Neutrinos are more or less impossible to precisely measure on their own because they have so little mass and tend to skip out of detectors without interacting with them. So to figure out the mass of the neutrinos, Robertson told Live Science, KATRIN counts the most energetic electrons and works backward from that number to deduce the neutrino's mass. The first results from KATRIN have been announced, and the researchers came to an early conclusion: Neutrinos have a mass no higher than 1.1 electron volts (eV).

Electron volts are the units of mass and energy physicists use when talking about the smallest things in the universe. (At the scale of fundamental particle, energy and mass are measured using the same units, and the neutrino-electron pairs have to have combined energy levels equivalent to their source neutron.) The Higgs boson, which lends other particles their mass, has a mass of 125 billion EV. Protons, the particles at the center of atoms, have masses of about 938 million eV. Electrons are a mere 510,000 eV. This experiment confirms that neutrinos are incredibly tiny.

KATRIN is a very big machine, but its methods are straightforward, Robertson said. The device's first chamber is full of gaseous tritium,  whose neutrons naturally decay into electrons and neutrinos. Physicists already know how much energy is involved when a neutron decays. Some of the energy is converted into the mass of the neutrino and the mass of the electron. And the rest gets poured into those newly-created particles, very roughly dictating how fast they go. Usually, that extra energy gets distributed pretty evenly between the electron and the neutrino. But sometimes most or all of the remaining energy gets dumped into one particle or another.

The physicists who designed the experiment didn't try to measure the neutrinos; those are allowed to escape the machine untouched. Instead, the experiment funnels the electrons into a giant vacuum chamber, called the spectrometer. An electric current then creates a very strong magnetic field that only the highest-energy electrons can pass through. At the other end of that chamber is a device that counts how many electrons make it through the field. As KATRIN slowly increases the magnetic field strength, Robertson said, the number of electrons getting through shrinks — almost as if it were going to fade all the way to zero. But at the very end of that spectrum of electron energy levels, something happens.

"The spectrum dies suddenly, before you reach the end point [where the electron would have all the energy released in the tritium decay], because the mass of the neutrino can't be stolen by the electron. It always has to be left behind for the neutrinos," Robertson said. The mass of the neutrino must be less than that tiny amount of energy missing from the very end of the spectrum. And after several weeks of runtime, the experimenters narrowed that number down to about half of the number that physicists previously knew about.

The idea that neutrinos have mass at all is revolutionary; the Standard Model, the mainstay physics theory that describes the subatomic world, once insisted neutrinos have no mass at all, Robertson pointed out. As far back as the 1980s, Russian and American researchers were trying to measure neutrino masses, but their results were problematic and imprecise. At one point, Russian researchers pegged the mass of the neutrino at precisely 30 eV — a nice number that would have revealed neutrinos as the missing link that would have explained the grand gravitational structure of the universe, filling in all the missing mass — but one that turned out to be wrong.

Robertson and his colleagues first started working with gaseous tritium back then, after they realized that the faintly radioactive substance offered the most precise source of neutron decay available to science.

"This has been a long search," Robertson said. "The [incorrect] Russian measurement of 30 eV was very exciting because it would have closed the universe gravitationally. And it's still exciting for that reason. Neutrinos play a big role in cosmology, and they have probably shaped the large scale structure of the universe."

All of those faint particles flying around tug on everything else with their gravity, and take and lend energy from all the other matter. Though as the mass number gets whittled down, Robertson said, the precise role these little particles play gets more complicated.

The 1.1 eV number, the researcher said, is interesting because it's the first experimentally-derived neutrino mass number that isn't high enough to explain the structure of the rest of the universe on its own.

"There is matter that is not anything we know about yet. There is this dark matter,” and it can’t be made of of the neutrinos that we know about, he said.

So this small number from a big vacuum chamber in Germany at the very least adds to the pile of evidence that the universe has elements that physics still doesn't understand.